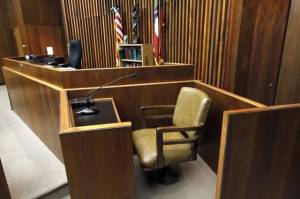 I’ve spent a fair amount of time in courtrooms, as a juror on three separate cases. But I’ve never had to take the witness stand. The closest I’ve come was all the way back when I was a family counseling intern. I had been working with a young couple accused of child abuse, and a judge called me into his chambers to ask whether in my professional opinion the couple should still have custody of their child.

I was a skinny, long-haired 23-year-old, with very little experience as a counselor. No opinion of mine could rightly be called professional.

So imagine me, a mere intern, laying out the evidence, and saying with matter-of-fact confidence to the judge, “There it is, your Honor. You be the judge.”

Not happening. He is the judge. And I’m nobody in particular.

But that’s not far off what the apostles Peter and John said to the Sanhedrin.

As we’ve seen, the ruling council in Jerusalem was disturbed by Peter’s preaching, and took him and John into custody. They probably expected these unsophisticated fishermen to get flustered and tongue-tied under the glare of their examination. But Peter surprised them with his confident and authoritative response. Not knowing what else to do, the council simply ordered the apostles to stop speaking in the name of Jesus.

Peter and John’s response was simple and direct: “Whether it is right in God’s sight to listen to you rather than to God, you must judge; for we cannot keep from speaking about what we have seen and heard” (Acts 4:19-20, NRSV).

Well, judge, you be the judge.

This was not defiance. Unlike their Master, Peter and John didn’t accuse their persecutors of being whitewashed tombs. Quite the contrary. Although laced with irony, the apostles’ answer recognized the council’s authority and called them to do the responsible thing: It’s your job to decide for yourselves what’s right in the eyes of God.

But that didn’t mean, of course, that they would do whatever the council told them to do. While implicitly calling the council to be faithful to God, they explicitly declared their own allegiance: But whatever you decide, we have to do what God has told us to do. We must witness to what we’ve seen and heard. 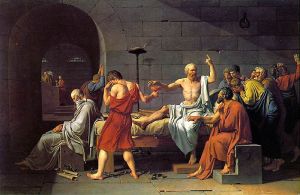 Some scholars hear in the apostles’ words an echo of the story of Socrates, the Athenian philosopher who over four centuries earlier was forced to commit suicide by drinking hemlock.  He had been brought to trial for corrupting the city’s youth and not believing in the city’s gods. In his own defense, Socrates wryly suggested that his “corruption” of the youth consisted in the way they imitated him by questioning those in authority and asking the kind of questions that exposed their pompous ignorance.

Answering the charge of impiety, he insisted that he did have something of a divine call to pursue wisdom and encourage the same in others. He put a hypothetical to the court. Question: what would he say if they offered to acquit him of all charges, on the condition that he stop seeking wisdom? Answer: he would reply, “I am more obedient to the god than you” — and would then go on to tell them that they should be ashamed of themselves for putting the pursuit of money, honor, and reputation above wisdom, truth, and goodness (Plato, Apology, 29c-d).

It was a well-known and well-loved story of speaking truth to power. Luke wrote Acts for Theophilus, and Theophilus would have appreciated the parallel.

The god Socrates served, however, is neither that of the Athenians, nor the God of Peter and John. “We must listen to God instead of you,” the apostles insisted. And just to be clear: who is the “God” who commissioned the apostles to spread the news? “You will be my witnesses,” Jesus had told them, “in Jerusalem, in all Judea and Samaria, and to the ends of the earth” (Acts 1:8).

And, oh, that first part, about Jerusalem?

Luke finishes the story with the impotence of the council:

After threatening them again, they let them go, finding no way to punish them because of the people, for all of them praised God for what had happened. For the man on whom this sign of healing had been performed was more than forty years old. (Acts 4:21-22)

Again, the apostles had broken no law, and the people were praising God for the healing, a miracle made more astounding by the fact that the man had been lame for more than forty years.

What could the council do? They didn’t want to risk what the first-century Twitter-verse would have done to supposedly religious authorities who went nuclear on innocent men who had done a spectacular good deed.

So they took the cautious route, for now: let them off with a stern warning, and cross your fingers.

Maybe that would be enough?

Don’t count on it, your Honor.