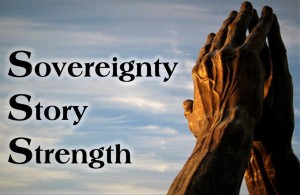 Is there a right way to pray?

After all, Jesus seemed to think his followers needed a lesson in prayer, and taught them what we know as the Lord’s Prayer. Perhaps even more importantly, he gave them a model: he demonstrated what it meant to live a life of prayer. He prayed in private. He prayed in public. He prayed the Psalms.

He even prayed from the cross.

But note: even though Jesus constantly spoke to his Father, we have no record of him praying “the Lord’s Prayer.” The same is true of the apostle Paul. Ditto for Peter and the others who asked Jesus to teach them to pray in the first place. That’s not to say, of course, that we know for certain that they didn’t pray those words. It only means that we should be thoughtful regarding what Jesus was teaching his followers.

There are two versions of the Lord’s Prayer in the New Testament. The shorter one is in Luke 11:2-4. The disciples see Jesus praying, then ask him to teach them. Nothing wrong with that. But they don’t just say, “Lord, teach us to pray like you pray”; they say, “Lord, teach us to pray, just as John taught his disciples” (vs. 1, CEB), as if they felt something was missing in their religious training.

The longer version of the prayer, the one more commonly known, is found in the middle of the Sermon on the Mount, in Matthew 6:9-13. There, Jesus is warning his followers not to use prayer as a way of racking up public piety points. Showy prayers don’t impress God, and longer prayers aren’t better than shorter ones (vss. 5-8). What Jesus gives his disciples, then, is a way to keep it short and sweet, a way that gets to the heart of what prayer should be all about.

Not surprisingly, there are parallels between what Jesus teaches his disciples and the words of some Jewish prayers. The point is that Jesus is not inventing some new secret ritual; rather, he is ushering his followers into a relationship with his Father, of which prayer should be an expression. The opening phrase, “Our Father,” suggests corporate prayer, which is why the Lord’s Prayer is used more in liturgical contexts rather than in private prayers at our bedsides. Still, many have sought to find in that prayer a model or template for how we might approach our Father in private.

Here, I want to go in a slightly different direction. I want to tie off our previous discussion of the prayer in Acts 4 by linking it back to the Lord’s Prayer and suggesting what I hope is an easy way to remember what we’ve learned. The main idea is this: an “Acts 4 prayer” is prayed in the face of anticipated challenges and is structured by three S’s of Sovereignty, Story, and Strength.

The Lord’s Prayer addresses God as our Father in heaven. This is intimate language to be sure, but it’s not sentimental.  It’s not “Daddy.” God is holy, and the prayer declares that all should know and recognize it: “Hallowed be thy name!” Moreover, God is not only addressed as Father, but as King: we pray for the coming of his kingdom, in such a way that his will would be done on earth as it is already perfectly done in heaven.

Similarly, in Acts 4, the gathered believers begin with a recognition of God’s sovereignty: God is Master of the Universe. This is contrasted with the futile plans of the people who hold earthly power, who plot against the Lord’s Messiah without having a clue how they have played directly into the eternal purposes of God.

The Lord’s Prayer then teaches the disciples to ask for what they need. I take the words “daily bread” to be an example of what grammar lovers call metonymy — a word or phrase that stands in for something else that’s related. In other words, the prayer is not just for literal bread but for the kind of ordinary, daily needs that bread represents. Our needs, however, are spiritual and not just physical. Thus, we need God’s forgiveness, as we learn to be more forgiving ourselves. And we pray for God’s help in escaping temptation and the wiles of the evil one.

In Acts 4, the church’s sense of need was framed by recent events: the arrest of Peter and John signaled the beginning of persecution. The fact that they came back unharmed gave the believers confidence in God’s sovereign will, but they knew they would have to keep depending on God for their strength. Thus, they prayed for boldness to continue preaching the gospel in the face of opposition.

What about that middle part? If, as I have suggested in previous posts, a sense of story is intrinsic to the Acts 4 prayer, where do we find it in the Lord’s Prayer? Of course, if the trio of “sovereignty, story, and strength” is a legitimate and helpful way to encapsulate what was prayed in Acts, that’s still true whether we find an analog for story in the Lord’s Prayer or not.

But the question is still a useful one. I’ll tackle it in the next post.