And the Father who sent me testifies about me.
–Jesus (John 5:37, CEB) 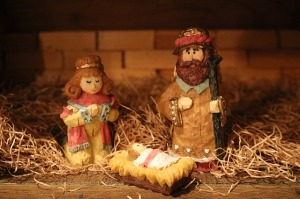 Christmas is a mere two weeks away. Many of us are surrounded by visual reminders: the decorations we trot out every year, with images and representations of the baby Jesus.

But what do we see when we look at these things? Sweet symbols of a sentimental season? Or the one the Father sent to do great works, to herald the coming of God’s kingdom?

As we saw in the previous post, the Pharisees and other leaders in Jerusalem were confronting Jesus for his supposed crimes against the Law. Jesus cited witnesses in his defense, including John the Baptist, hoping that they might see their own errors with regard to John and set themselves straight.

But Jesus isn’t done. He steps up his defense, and in so doing, goes on the offensive instead:

I have a witness greater than John’s testimony. The Father has given me works to do so that I might complete them. These works I do testify about me that the Father sent me. And the Father who sent me testifies about me. You have never even heard his voice or seen his form, and you don’t have his word dwelling with you because you don’t believe the one whom he has sent. Examine the scriptures, since you think that in them you have eternal life. They also testify about me, yet you don’t want to come to me so that you can have life. (5:36-40)

Jesus’ miraculous works aren’t done solely out of compassion. In the gospel of John, they are presented as signs, as evidence pointing to the true identity and origin of Jesus. But as we’ve seen in earlier posts, to the Jerusalem leaders, signs like the healing of the lame man didn’t show Jesus to be the Son of God. They showed him to be an upstart, a rebel, a law-breaker, and ultimately and most ironically, a blasphemer.

Jesus is calling them out on their blindness and hypocrisy. He seems to be alluding back to the ancient stories, in which the people of God heard his voice at Sinai, and followed the visible pillars of cloud and fire in the wilderness. Sometimes, like the devoted psalmist, they even treasured God’s word in their hearts.

But what of Jesus’ opponents? It’s as if he were saying to them, You pride yourselves on being the leaders of the people. You assume that your vision is clear, that you are seeing things rightly and righteously. But you’re not who you think you are. You don’t even truly treasure the Scriptures, for if you did, you’d know that they point to me. God the Father has sent me. If you would come to me, you could have life. But you just won’t believe.

Either Jesus is who he says he is, or he isn’t. Either he has the intimate relationship with the Father he says he has, or he doesn’t. Jesus knows that he speaks the truth, and the Father himself testifies to that fact. But Jesus’ opponents have already decided the case. Neither the Scriptures, nor John the Baptist, nor Jesus’ miraculous works, nor even the testimony of the Father make a difference. To them, Jesus is a blasphemer, plain and simple. How could anyone see otherwise?

As believers, we’re not stuck in the same trap. But I ask again: when we look at the baby Jesus, what do we see?