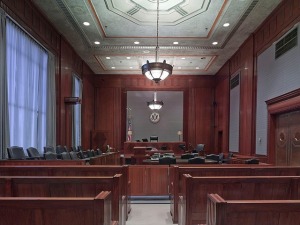 never had to testify in a courtroom, though I have been a juror three times, including serving as foreman on a criminal case. Our job as a jury was to weigh all evidence and come to a shared understanding of how the “facts” in the case fit together.

Similarly, there are biblical passages that evoke something like a courtroom drama. At the end of John 5, for example, Jesus is the one “on trial” as he is confronted by angry Jewish leaders. It’s Jerusalem v. Jesus, and they’ve already made up their minds. He’s guilty of both violating the Sabbath and of blasphemy.

But Jesus presents his case anyway. He begins with these words:

If I testify about myself, my testimony isn’t true. There is someone else who testifies about me, and I know his testimony about me is true. You sent a delegation to John, and he testified to the truth. Although I don’t accept human testimony, I say these things so that you can be saved. John was a burning and shining lamp, and, at least for a while, you were willing to celebrate in his light. (John 5:31-35, CEB)

Obviously, Jesus doesn’t mean that if he speaks on his own behalf, his words would be false, but that his testimony wouldn’t be considered trustworthy. No matter. There are other witnesses to call, most notably the Father himself (vs. 37), a statement sure to make his opponents grind their teeth even more.

Here, however, Jesus mentions John the Baptist. This isn’t name dropping. Jesus makes it clear that he isn’t citing the prophet’s testimony for his own sake. It’s for theirs, for his opponents’ salvation. After all, when John the Baptist declared Jesus to be the Lamb of God, some of his own disciples left him to follow Jesus instead (1:35-37). The Jewish leaders had the same chance to hear, believe, and follow.

But they didn’t. Look, Jesus says, you yourselves heard about John the Baptist and sent your own delegation to check him out. He spoke truly of me. Why didn’t you listen?

John had given testimony to the light (1:8), and Jesus calls John himself a shining lamp. But if the Jerusalem leaders didn’t believe, what does Jesus mean by saying that they were “willing to celebrate in his light”?

The past tense — “John was…” — is a little ominous. We can’t know for certain, but the Jewish leadership may have been involved in John’s arrest and execution. If so, then Jesus may be saying, John told you that he was neither the Messiah, nor Elijah, nor the Prophet about whom Moses had written. Yet you knew he was special, some kind of prophet. But you couldn’t help making it all about you. You were willing to celebrate him until the truth he spoke stuck in your craw. Then you got him out of the way.

In other words, who should really be on trial here?

Jesus has other witnesses to call, but as we’ll see, the balance in the courtroom shifts when God the Father takes the stand: the accusers become the accused. More on that in subsequent posts.