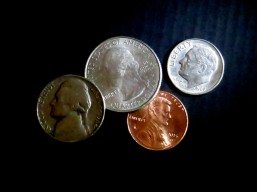 This year in America, February 15th will be Presidents’ Day, and — sorry! — I can’t help but think of the phrase, “dead presidents.” As slang terms for money go, this one’s admittedly macabre. It’s meant to refer to paper money, but the same could apply to coins as well. It makes you think twice about what you might have to do to have a commemorative coin created in your honor.

But maybe in a world such as ours, dominated by the ubiquitous use of visual and social media, a commemorative coin wouldn’t be as big a deal as it once was. Images abound. Want to know what somebody looks like? Google them. Chances are, you’ll find something.

Technologically speaking, this is not the world of the Bible. Kings, emperors, conquerors: their images weren’t posted on Facebook, but sculpted into statuary or stamped on coins (e.g., Mark 12:16).

And that fact may tell us something about Jesus.

The writer of the book of Hebrews wants his audience to understand: Jesus Christ, as the Son of God, is greater than any created being, including angels, and greater than the Law. While God did indeed speak through Moses and the prophets, the gospel is superior, for in the Son we get to see exactly what the Creator God is like. The book begins with this statement:

In the past, God spoke through the prophets to our ancestors in many times and many ways. In these final days, though, he spoke to us through a Son. God made his Son the heir of everything and created the world through him. The Son is the light of God’s glory and the imprint of God’s being. He maintains everything with his powerful message. After he carried out the cleansing of people from their sins, he sat down at the right side of the highest majesty. And the Son became so much greater than the other messengers, such as angels, that he received a more important title than theirs. (Heb 1:1:5, CEB)

The “imprint of God’s being”: the original word is actually charakter, referring both to the tool used to stamp coins and seals, as well as the image that results. The NIV and NRSV add the adjective “exact” to make a point: with such a process, the coin will bear the exact image made by the tool.

It’s a stunning statement. Jesus Christ is the exact image of God, in whom we see the very character of God on display. Jesus is a prophet, but more than a prophet. A teacher, but more than a teacher. The Son is the agent of creation, the light of God’s glory, and the heir of all.

We talk a lot about “Christian character.” Sometimes, the phrase suggests that we should be good, moral, upright, nice people. That’s certainly not a bad thing. But that’s a bit short of understanding Christian character as meaning we have been “stamped” with Jesus, as Jesus was stamped with the exact image of God.

Perhaps what we need to do is ask ourselves who Jesus is to us: do we see him as the writer to the Hebrews did? And when we’ve answered that question, we can ponder another: who are we to others?