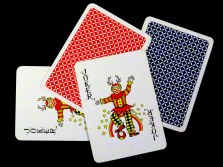 I grew up in a family that played cards for fun: solitaire, gin rummy, hearts, blackjack, poker. And I was always intrigued with the Joker. We only used it to play poker, where it served as a special kind of wild card, and was therefore the card you were happiest to be dealt.

In reality, there was a serious side to being the jester in a royal court. You had license to act like a buffoon to entertain the guests. But the entertainment would frequently turn satirical, poking fun at important people, like the live equivalent of a political cartoon. It could get you in trouble.

I hope that you will put up with me while I act like a fool. Well, in fact, you are putting up with me! I’m deeply concerned about you with the same concern that God has. As your father, I promised you in marriage to one husband. I promised to present you as an innocent virgin to Christ himself. But I’m afraid that your minds might be seduced in the same way as the snake deceived Eve with his devious tricks. You might be unable to focus completely on a genuine and innocent commitment to Christ. If a person comes and preaches some other Jesus than the one we preached, or if you receive a different Spirit than the one you had received, or a different gospel than the one you embraced, you put up with it so easily! (2 Cor 11:1-4, CEB)

He does this to make a point. Put up with me for a moment while I talk like a fool, he says. After all, you’re already putting up with foolishness: the false gospel being offered by my opponents. In all likelihood, when Paul uses such language, he’s referring not to court buffoonery but the Old Testament contrast between wisdom and foolishness, between a life lived in accordance with God’s ways and one which isn’t.

He’s already said that there’s only one proper way to boast: to “boast in the Lord,” in God’s accomplishment of his will through his undeserving servants. But some of the Corinthians are still under the sway of his opponents’ boasting. Thus he is forced to do something that sticks in his spiritual craw. To fight fire with fire, he must boast as they boast, to show the Corinthians how foolish they are being.

How serious is their foolishness? Paul sees himself as their spiritual father, promising his virgin daughter in marriage to Jesus and responsible for her continuing purity. From Paul’s point of view, when the Corinthians listen to his opponents’ preaching, they’re violating their betrothal to Christ. He likens their behavior to Eve’s willingness to be deceived by Satan. And in case they’ve missed the point, Paul will later suggest that his opponents are not only counterfeit apostles, they’re servants of Satan, destined for damnation (vss. 13-15).

In his earlier letter, Paul already made clear that the divine wisdom of a suffering and crucified Savior is foolishness to those who consider themselves worldly-wise (1 Cor 2:6-16). That’s the root problem in Corinth. Because the Corinthians are far more schooled in the world’s wisdom than in the gospel, they’re easily deceived by smooth-talking hucksters with their promises of health and wealth.

Paul’s warning should give us pause. The marketplace of ideas and religions is bewilderingly diverse. What kind of foolishness are we all too willing to accept?