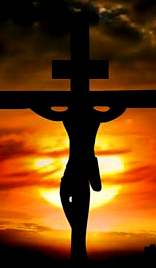 He was oppressed and tormented,
but didn’t open his mouth.
Like a lamb being brought to slaughter,
like a ewe silent before her shearers,
he didn’t open his mouth.
Due to an unjust ruling he was taken away,
and his fate—who will think about it?
He was eliminated from the land of the living,
struck dead because of my people’s rebellion.
— Isaiah 53:7-8, CEB

The chariot bumped noisily along the hot, dusty road leading southwest out of Jerusalem. But the high official who sat within was too engrossed in his reading to notice. He had heard remarkable stories about the God of Israel and was drawn to worship him. His passion drove him to purchase expensive scrolls to read on his own, and to make the long, difficult pilgrimage to Jerusalem for the feasts, as a devout Jew might.

But he was not a Jew. He was a Gentile, a servant to the queen of Ethiopia. As a eunuch, he was condemned by Israel’s law to forever be an outsider to the faith.

Having visited Jerusalem and the temple, he was slowly making his way home. Holding open the scroll of the prophet Isaiah, he carefully and deliberately mouthed the words aloud: “Like a lamb being brought to slaughter…” Who is Isaiah writing about?  he wondered. Who is this “lamb”? Is he speaking of himself, or someone else?

As he pondered his own question, a man appeared as if from nowhere, approaching the chariot. “Do you understand what you’re reading?” the stranger asked.

To the Ethiopian official, it felt like a godsend. He didn’t ask me what I’m reading; he asked if I understand it — and I don’t. He must know this prophecy.  “No, I don’t understand,” he responded. “How can I? I need some guidance.”

At the official’s invitation, Philip climbed up into the chariot and sat down next to him. The man had been reading the prophecy of God’s Suffering Servant: he was despised, struck down, pierced, crushed, tormented… Starting from that portion of the scroll, Philip explained how Isaiah’s words had been fulfilled in the life, death, and resurrection of Jesus.

But he didn’t stop there. Philip unrolled the scroll further, pointing to God’s promise of hope to his covenant people, and his call for them to seek him and find their joy. Eventually, he reached these words:

Let no foreigner who is bound to the Lord say, “The Lord will surely exclude me from his people.” And let no eunuch complain, “I am only a dry tree.” For this is what the Lord says: “To the eunuchs who keep my Sabbaths, who choose what pleases me and hold fast to my covenant—to them I will give within my temple and its walls a memorial and a name better than sons and daughters; I will give them an everlasting name that will endure forever. (Isa 56:3-5)

The official’s eyes widened in surprise. Now Isaiah is writing about me! he thought. I’m the foreigner bound to the Lord. I’m the eunuch. I want to hold fast to the covenant of this God, this remarkable God.

The prophet’s words enfolded the official in a welcoming embrace. He didn’t have to be an outsider anymore. Even as a Gentile, a eunuch, there was no longer any barrier to belonging. With this God, he could be better than a son.

The chariot came upon a wadi by the side of the road. The water shimmered invitingly in the desert sun, as if to say, I’m here just for you. Excitedly, the official turned to Philip and exclaimed, “Water! There’s nothing to keep me from being baptized, is there? Right here, right now?” He ordered the driver to stop, and Philip and the eunuch clambered down from the chariot and into the water.

Philip baptized the official in the name of Jesus. And as they came back up out of the water, God spirited Philip away to spread the gospel northward,  leaving the startled eunuch to resume his journey south.

But he went his way rejoicing. For he not only had somewhere to go, but a story to tell.