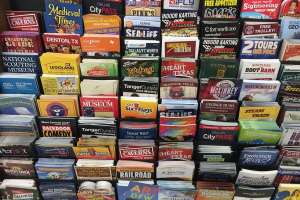 But one thing seemed fairly constant. Somewhere near the concierge desk, there would be a display rack of colorful brochures promoting the local attractions. Theme parks, museums, wineries, malls, all at their glossiest, described with glowing adjectives: Exciting! Beautiful! Scenic! Fun! Adventurous! You’d think, Gee, I’ve come all this way. It would be sad to miss out on that exciting and adventurous petting zoo! Later, after your fill of cute baby animals, you’d return to your hotel room tired but satisfied that you’d fulfilled your duties as a discerning tourist.

Then you’d set to work on that little souvenir you brought back on the bottom of your shoe.

I doubt that there were tourism brochures in the days of the New Testament. Still, major cities were known for their must-see attractions, and sometimes the local culture carried its own reputation. If I were to imagine a brochure for Ephesus, it might read, “Visit scenic Ephesus! It’s a magical place!”

Magical, indeed. It would be an exaggeration to call Ephesus the Hogwarts of the ancient world, but that might not be far off the mark.

People have always been fascinated by magic. As a kid, I was “spellbound” by television magician Mark Wilson. Today, people think of Penn and Teller or David Copperfield. Adults know it’s all just an illusion, a clever use of sleight-of-hand and misdirection to fool the mind into thinking someone’s done the impossible. The fascination is in trying to spot the deception.

That’s a bit different than the occasional displays of magic in the book of Acts. People of that time and place believed in the existence of spiritual powers that could be manipulated with secret spells, spells that people would pay good money to learn.

Ephesus already had a reputation as a center of magical practice long before Paul arrived. For example, the city was known for the so-called Ephesia Grammata, or “Ephesian letters” (as in letters of the alphabet) – a string of nonsense syllables engraved on the statue of Artemis. The words, if pronounced correctly, were thought to have magical power, like their more tongue-in-cheek modern cousins: abracadabra, allakazam, and hocus pocus.

This is the background to a little episode Luke narrates in Acts 19, a story that is at once both serious and funny. As Luke has already told us, the belief in and the practice of magic wasn’t limited to Ephesus. Think back to the story of Simon Magus of Samaria in Acts 8.

Simon, a well-known sorcerer, was astonished at the miracles performed by Philip, and by the way the Holy Spirit seemed to come through the touch of Peter and John. Even as a newly baptized believer, Simon couldn’t stop thinking as a sorcerer, and seemed bitter at being upstaged by the apostles. He therefore tried to buy from them the power to bestow the Holy Spirit, and was immediately and rightly chastised for his clueless arrogance.

Simon’s story resonates with the one in Acts 19 (and possibly that of the fortune-teller in Acts 16): the popular belief in magic; the links between magic, money, and prestige; and the odd cultural mashup of magic and religion, including both Jewish and Christian belief.

And the point of Luke’s story of the seven sons of Sceva, as we will see, is to show where the true power really lies.