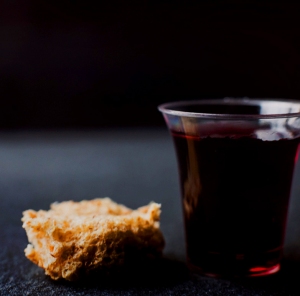 Like many of you, I’ve taken the Lord’s Supper with other believers in a number of different settings and traditions. In so doing, I’ve experienced the bread and cup in a remarkable variety of forms.

Sometimes, the bread is presented as a whole loaf, for which an officiant gives thanks. The loaf is then broken into large pieces from which the people pluck their own morsels.

But other times, the bread is broken up into small individual bits beforehand. I’ve been served white bread, pita bread, sourdough bread, and King’s Hawaiian bread, as well as saltines, soup crackers, wafers, and matzos. The cup may be a common chalice (brass, stainless steel, glass), tiny individual plastic cups, or even Dixie cups. (Warning: once, the juice was poured into paper bathroom cups long in advance; by the time we actually got to them in the service, the cups were leaking.)

Our church even experimented briefly with the individualized bread/cup  combo: a prefab little plastic cup of juice with a wafer integrated into the foil seal on top. (Hey, anything to save on prep time — though, frankly, the wafer tasted like paper.)

Whatever the theological reasons (if any) for each choice, people get used to doing things a particular way. Even those who can’t explain why we bother with the Lord’s Supper in the first place (save that Jesus told us to) may say that it feels strange or even inappropriate to change up the routine. Why do we do things this way? a newbie might ask. Because we’ve always done it this way, comes the answer, as if no other reason were necessary.

There are many habits of thought and practice associated with the life of the local church, many of which we are unaware. They’re like well-worn ruts in a country road. If we travel a particular path, we may automatically follow the precedent worn into the path by those who have gone before, or by our own previous behavior.

There’s nothing pernicious about this.

The problem comes when someone perceives that a change is needed. And that’s when we find out whether our habits have become idolatrous.

Just about anything can become fodder for a church conflict, from how we celebrate communion to the color of the new carpet. Change threatens the existing order, shaking us out of our comfortable routines, undermining the roles of power and status we’ve taken for granted. On one side of the conflict, people may position themselves as guardians of tradition; on the other, as crusaders for much-needed reform.

And in the midst of it all, in the name of Jesus and everything that’s good and right and holy, we act toward each other in some very un-Christlike ways.

We’ve become idolaters, worshiping the way we worship, instead of worshiping God.

I say this in light of our recent examination of Stephen’s testimony before the Sanhedrin. In pointing to the idolatry of his accusers, Stephen follows in the long tradition of the prophets, including both Amos and Isaiah, whom he quotes. (Note: in Acts 7:42-43, he quotes Amos 5:25-27. But if you look up the Amos passage in your Bible, the words will be quite different. That’s because Stephen, a Greek-speaking Jew, is quoting from what’s known as the Septuagint, a Greek translation whose content differs slightly from the Hebrew in places.)

In particular, as we’ve seen, Stephen quotes Isaiah 66:1-2, to make the point that nothing man-made — whether an ancient temple or a contemporary church building — can contain the one who created the universe.

Isaiah continues, with words that Stephen doesn’t quote but that the members of the Sanhedrin surely know. Through the prophet, God chastises his people for empty worship; they do not listen to God, and their sacrifices have become an abomination to him (Isa 66:3-4).

Most importantly, here are the words that follow immediately upon the ones Stephen quotes. Through Isaiah, God says, “But this is the one to whom I will look, to the humble and contrite in spirit, who trembles at my word” (Isa 66:2b, NRSV).

The members of the council proudly believed themselves to be the guardians of the tradition of Moses and the sacredness of the Jerusalem Temple. But they had ceased listening to God. They had executed an innocent man — the very presence of God among them — and were unrepentant. Their protection of the old ways had become idolatrous, less about true worship, and more about preserving the bases of their power and significance.

That, I think, is the kind of idolatry we must still wrestle with today. We may claim to follow the same Jesus, to worship the same God, to read the same Holy Writ. But how we respond to change may tell us things about ourselves that we don’t want to know.

Whenever we fall into conflict in our churches, we should look carefully at our attitudes, beliefs, and behavior, and ask ourselves as humbly and honestly as possible, “Who’s being served?”

If we know that we are serving God, we can carry on.

If not, we need to name and repent of our idolatry.