“Idolatry.” It’s a harsh and judgmental word. The very notion of idolatry doesn’t mesh well with a culture in which people insist on the freedom to define God as they please. 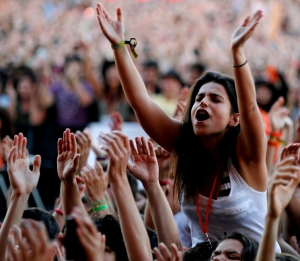 In that context, the word and its associations soften. We watch singers compete for the title of “American Idol” and cheerfully root for our favorite. We “idolize” musicians, movie stars, politicians, sports figures, and other celebrities. We hang their pictures on our walls or follow them on Twitter and Instagram. We adorn our homes and bodies with their names, products, and likenesses. We may even wish we could be like them, or look like them, or have their success and popularity.

We do this even as Christians, even as those who swear that there is only one true God.

Hang on a minute, one might protest. That’s not idolatry. It’s not as if I’m actually bowing down at someone’s shrine.

Perhaps. But we don’t have to be in a so-called “house of worship” to engage in worshipful behavior. And conversely, what we do in our houses of worship isn’t always worship. In fact, it’s quite possible to think you’re being worshipful and be engaging in idolatry instead.

At least, Stephen seemed to think so.

Stephen was charged with the crime of blasphemy against Moses and the Temple, and called to answer to the high priest and the Sanhedrin. In response, he began retelling the story of Israel. His summary of Moses’ life and ministry was brief but unobjectionable; I imagine many of the council nodding in tacit agreement.

At least until he got to the part about idolatry.

The story of the Golden Calf was well-known to both Stephen and his audience (see the previous post for the background). Having said what he needed to say about Moses, Stephen began turning the story of Israel in the direction of their chronic problem with idolatry:

[Moses is] also the one whom our ancestors refused to obey. Instead, they pushed him aside and, in their thoughts and desires, returned to Egypt. They told Aaron, ‘Make us gods that will lead us. As for this Moses who led us out of Egypt, we don’t know what’s happened to him!’ That’s when they made an idol in the shape of a calf, offered a sacrifice to it, and began to celebrate what they had made with their own hands. (Acts 7:39-41, CEB)

Their hearts had already turned to Egypt earlier when, in their hunger, they began to speak fondly of their life there. Later, at the foot of Mount Sinai, when Moses had been away too long, they went anxiously to Aaron, who demanded their golden jewelry, melted it down, and formed it into a calf. He calmed them down by giving them something tangible to worship.

Then, to put it mildly, it became time to par–tay.

There are, of course, somewhat charitable ways to view the situation. Egypt was the only home these people knew, and indeed, many of the people with them were probably Egyptian. They likely had little experience with monotheism, and plenty with other gods. They were victims of their naiveté and of groupthink.

Moreover, some view Aaron as stalling for time, hoping Moses would return soon. That’s not idolatry, that’s a lack of skill in organizational leadership.

Maybe. But none of that changes the fact that (a) God had revealed himself multiple times in unmistakable ways, (b) God had explicitly forbidden such an act, and (c) the people had promised to obey.

God was angry. Moses was angry. And when Moses confronted his brother, all Aaron could say was, “Yeah, but bro, I just threw the gold in the fire, and out popped this calf!” (Exod 32:24).

This was not, unfortunately, an isolated incident, a one-time slip: Oops, sorry Moses, we weren’t thinking. It’ll never happen again. Stephen portrays the episode as just the first in long line of idolatrous betrayals, running through the wilderness period and all the way to the Babylonian exile.

I imagine some of the council members getting a little tense at this point, perhaps holding their breath. It’s fine for him to remind us of the greatness of Moses. But where’s he going with this stuff about idolatry? What’s he trying to say?

They’re not going to like it. Because, as we’ll see, Stephen is about to suggest that the temple authorities were worshiping their own Golden Calf.