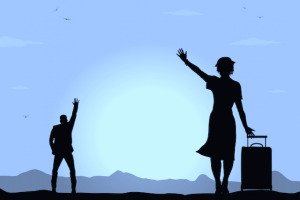 “Bye!” we might say breezily as we take our leave of each other. Really, it’s quite a time-saver. That way, we only have to utter one syllable instead of two: “Goodbye.” That’s a 50% saving in time and effort.

And “goodbye,” in turn, is much more economical than the phrase it abbreviates: “God be with you.”

But something gets lost in all that verbal efficiency: a way of seeing the world and our place in it.

As we’ve seen in previous posts, Stephen’s defense before the Sanhedrin entails a retelling of the story of Israel. The story begins with the faith of Abraham, briefly mentions Isaac and Jacob, and continues with Jacob’s son Joseph.

Again, Stephen telescopes years of history into just a handful of sentences. The other sons of Jacob, out of jealousy, sold Joseph into slavery. In Egypt, Joseph won favor with Pharaoh and rocketed to power and prominence. A famine eventually brought Jacob and his sons to Egypt, where there was food to spare because of Joseph’s divinely given wisdom and foresight.

We know the story. Joseph’s brothers, at first, didn’t recognize him. He had been a boy when they betrayed him; now, he was a man. To them, Joseph would have looked and sounded like the Egyptian they believed him to be.

When Joseph finally revealed his identity to them, there was a tearful reunion. The extended family relocated to Egypt to live out their days, with Pharaoh’s blessing. But they never forgot God’s earlier promise. After Jacob and his sons died, their bodies were all taken back to be buried in Shechem, where many years earlier God had appeared to Abraham and promised the land to his descendants (Gen 12:6-7; Acts 7:16).

Stephen, of course, leaves out a tremendous amount of detail. He says nothing about the way Joseph terrorized his clueless brothers, trying to manipulate them into leaving Benjamin in Egypt. Nor does he mention that the reconciliation between the brothers was far from perfect. Though Joseph insisted they had nothing to fear, the brothers were still wary of him. After Jacob died, they played on Joseph’s grief and lied to him, saying that Jacob’s dying wish was for Joseph to fully pardon his brothers (Gen 50:15-17).

Families. They’re complicated. Even in the Bible.

But none of that is Stephen’s concern. If there’s one phrase that could sum up his main point, it would be this: “but God was with him” (Acts 7:9, NRSV). With Joseph as he was sold as a slave. With him when he was falsely accused of a crime he didn’t commit. With him in prison.

And yes, with him even when he behaved in a less than exemplary fashion with his brothers.

“God was with him.” That’s not just a general word of inspiration or encouragement. Jesus had been accused of threatening to destroy the temple; Stephen stood accused similarly. He was being branded as a dangerous subversive, a threat to the center of Jewish identity and prosperity. How dare he challenge the traditions of Moses? To speak against the temple, the very dwelling place of God?

And all of this was long before anyone dreamed of a temple.

The punchline of the story, of course, will be that while God in grace was constantly with his people, guiding them, revealing himself to them, they rejected him. They rebelled against Moses, persecuted the prophets, and killed the Messiah.

And not surprisingly, Stephen will himself become the latest victim of their lack of vision.

“Goodbye.” English speakers have lost the habit of sending people on their way with the wish that God would go with them. Nor is it just English; I doubt the words adios or adieu evoke much in the way of transcendence anymore.

Too bad. We could use the reminder.