Sometimes, folks are just way too impressed with people who have doctoral degrees. 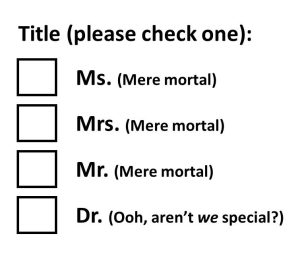 I should know. I are one of them impressive academic types.

Don’t get me wrong. I’m not saying that the world doesn’t need people with specialized knowledge and training. Far from it — just imagine, for example, being assigned a heart surgeon who learned his trade on YouTube, or driving over a bridge designed by someone whose only experience with construction was playing with LEGO.

Earning a doctorate, moreover, can be long, hard, expensive work, made even more complicated by institutional politics. The whole process can be draining and discouraging. Survivors are worthy of respect for that reason alone.

But there’s often a kind of mystique surrounding the letters “PhD,” with all the attendant stereotypes. I once had a friend at church with whom I enjoyed free and easy conversation — until he discovered that I have a PhD. “You’re a PhD?” he asked, wide-eyed and incredulous. “You don’t act like a PhD.”

I took it as a compliment, but I never did find out what he meant by that.

Every culture has its markers of success. Formal education probably carries less prestige than it once did, but where education is valued, the mystique lingers. And if the truth be told, people with PhDs are not above encouraging a bit of it themselves. We like being admired. We like the status that comes with our credentials.

And we hate being shown up by someone with no credentials.

As we’ve seen, when Peter began to preach to the crowd that had gathered in the outer court of the Jerusalem temple, the authorities came out in force to arrest him, together with John, who was with him. Technically, they had not violated any laws. But the officials were concerned about the consequences of Peter’s preaching about resurrection in Jesus. If he had merely waxed eloquent about resurrection in general, that probably wouldn’t have raised as many hackles; the Sadducees might have hated it, but the Pharisees would have approved. The problem was Peter’s preaching in the name, power, and authority of Jesus, the man the Jerusalem leaders had conspired to assassinate.

So the council brought them in for questioning, along with the lame beggar Peter had healed, hoping to intimidate them with the status and authority of the august assembly. Peter and John, after all, were working-class stiffs without advanced degrees. How hard could it be to cow them into submission?

But Peter, filled with the Holy Spirit, was unimpressed. He spoke clearly and forcefully. He even dared to quote Scripture to them. Picture it: a guy with at best a high school diploma, confronting a roomful of seminary PhDs wearing their academic regalia, challenging them on their interpretation of the Bible. The nerve!

How did the council respond? Luke writes:

Now when they saw the boldness of Peter and John and realized that they were uneducated and ordinary men, they were amazed and recognized them as companions of Jesus. When they saw the man who had been cured standing beside them, they had nothing to say in opposition. (Acts 4:13-14, NRSV)

“Uneducated.” The word could be translated as “illiterate,” but probably is meant to suggest that they didn’t have the same training as the teachers of the law. “Ordinary”: in Greek, the word is idiotes, from which we derive the English word “idiot.” But the word doesn’t mean someone who is foolish or unintelligent. It means, These guys are nobody special; they’re laymen, not trained professionals like we are!

It was supposed to be simple. It was anything but. The council members were shocked when Peter stood up to them. How was such boldness possible? How could Peter be so confident, even in his handling of the Scripture?

Even they knew the answer: these men have been with Jesus.

The Jesus who had himself healed the lame. The Jesus who had turned the rhetorical tables on every pompous expert who had tried to embarrass him. The Jesus in whose name the man standing before them — standing, on his own, for the first time in his life! — was healed.

Although Luke doesn’t say it quite this way, I don’t think the council merely recognized Peter and John as having been with Jesus; I think they recognized a bit of Jesus in them.

Not bad, I’d say, for two guys taken for idiots.