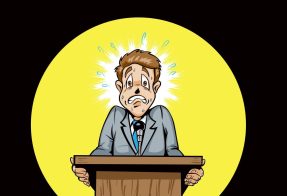 Here’s a new vocabulary word for you: glossophobia. It means the fear of public speaking. Getting up in front of a group makes many people anxious. That’s why we admire people who seem calm and composed when speaking to large groups, who handle themselves well even in the midst of debate.

Indeed, whatever people thought about the content of what Jesus said, they admired his delivery: confident and authoritative, able to turn the tables on any would-be challenger, able to speak truth to power.

But go figure: the Word of God was good with words. What about the fishermen following him? How well would they be able to preach to the crowds, or stand up to the withering accusations of powerful opponents?

Miraculously well, actually. That’s what happens when the Holy Spirit enters the picture.

Jesus, of course, had predicted this. “You’re going to get dragged before the authorities,” he warned them in advance. “But don’t fret about what to say. The Holy Spirit will give you the words you need” (Luke 12:11-12).

And later, when Peter and John were hauled before the Sanhedrin, that’s exactly what happened.

By what power, in what name had Peter healed the lame man in the temple? Most likely, it was the high priest Caiaphas himself who put the question. Peter could have just said, “Jesus,” and waited for the next question. But the Holy Spirit had other ideas, prompting him to say more:

Leaders of the people and elders, are we being examined today because something good was done for a sick person, a good deed that healed him? If so, then you and all the people of Israel need to know that this man stands healthy before you because of the name of Jesus Christ the Nazarene—whom you crucified but whom God raised from the dead. This Jesus is the stone you builders rejected; he has become the cornerstone! Salvation can be found in no one else. Throughout the whole world, no other name has been given among humans through which we must be saved. (Acts 4:8-12, CEB)

Peter’s words begin politely enough. And we hear an echo of how Jesus once responded to those who wanted to stone him for blasphemy: “I have shown you many good works from the Father. For which of those works do you stone me?” (John 10:32). Both responses prod at the motives of the questioner: It should be obvious that this is the work of God, so what’s your real problem?

But all right, Peter says. You want a name, I’ll give you a name: Jesus.

Peter doesn’t stop there. He makes a pointed contrast: you crucified him, but God raised him from the dead. Take that, Sadducees: not only has resurrection already begun in Jesus, it began with the one you crucified.

And he says even more, going back to the prophecy of the cornerstone in Psalm 118, which we looked at in last Sunday’s post. There is resonance galore in Peter’s quoting of the psalm:

The council members, however, would have understood Israel as the cornerstone, as the foundation of God’s new construction project. And it would have been easy for them to take for granted that this extended to everything they themselves stood for, including the whole complicated and corrupt temple system.

Peter leaves no doubt. Jesus is the cornerstone, the embodiment of the true Israel. And you, he says bluntly, are the builders who rejected him.

We’ll see how the council responds to that accusation shortly. But Sunday is Easter — an appropriate time to reflect on the importance of the resurrection before we move on with the story.