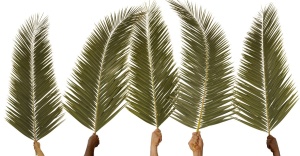 As we saw in the previous post, John is the only gospel writer to tell us that the crowds who acclaimed Jesus on Palm Sunday used…well, palms. It’s a small but potentially important detail which, I think, helps us understand what John is up to in his unique telling of the tale.

Unlike Matthew, Mark, and Luke, John locates much of his narrative in Jerusalem, and the context is typically the celebration of one of the festivals — Passover, of course, but also the Festival of Tabernacles and the Festival of Dedication. That’s more than just telling some of the stories of Jesus that his predecessors left out. It’s as if John wants to make a specific point of showing how the question of Jesus’ identity, particularly as represented in his miraculous signs and claims about himself, clashes with the collective imagination of the people, as represented in the festivals and the temple.

The clash is concretely embodied in Jesus’ debates with the ideological and political leadership in Jerusalem, the scholars and temple authorities who are supposed to be the keepers of the story that defines the people’s identity and hopes. But we can see it also in the ways people acclaim Jesus as king.

We’ve seen it before. The miracle of the feeding of over 5,000 people also occurred in the days leading up to the Passover. Afterward, some of the people tried to force him to be their king (John 6:15). But this was neither God’s time nor place, and Jesus slipped away.

Now, here we are again: Passover is approaching. Jerusalem is overrun with pilgrims. Memories of what God did in former days to save his people are in the air. And people are wondering if Jesus will show, given the price on his head.

Then the murmur spreads through the crowd: He’s coming.

Perhaps John’s most important contribution to the story is to tie it to the miracle of raising Lazarus from the dead. It helps us to imagine the buzz, the pandemonium. It’s not just that Jesus happens to arrive at such-and-such a time of day, and the pilgrims on the road happen to notice. Word of the miracle had already spread from Bethany to Jerusalem, and people had gone out to see what the fuss was about. They ended up as believers.

So here’s how the scene probably looked. Jesus is coming down the road into Jerusalem. The road is crowded with pilgrims; many of them are from Galilee, and already know Jesus and his ministry. Jesus is accompanied not only by the Twelve, but an entourage from Bethany. Hearing the news of his approach, people are also coming out from Jerusalem, and the folks who have been in Bethany are actively telling them about Lazarus (John 12:17-18).

In a perfect storm of Passover-inspired enthusiasm, the people take palm branches and acclaim Jesus as their king. The shout goes up, and keeps on going: “Hosanna! Blessed is he who comes in the name of the Lord! Blessed is the king of Israel!” (John 12:13, NRSV). And Jesus accepts their praise, much to the dismay of the Pharisees (vs. 19; cf. also Luke 19:39).

“Triumphal” entry indeed. Problem is, the kind of king the crowds think they are hailing is not the kind Jesus is proposing to be. More on that in the next post.