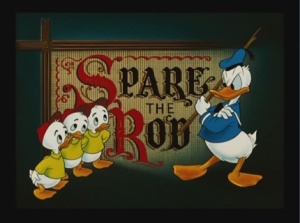 True or false: the phrase “Spare the rod and spoil the child” means that children should be physically disciplined, and is found in the Book of Proverbs.

Answer: false. On both counts.

The actual origin of the phrase is a satirical poem entitled Hudibras, written by Samuel Butler in the late 17th century. In context, the line is spoken by an amorous widow, and has sexual and sadomasochistic overtones.

I presume that’s not what most people mean when they say it now.

That said, Butler, a satirist, probably did have a verse from Proverbs in mind when he wrote that line: “Those who spare the rod hate their children, but those who love them are diligent to discipline them” (Prov 13:24, NRSV). Similarly, there are other references to “the rod” in Proverbs:

That last verse in particular is apt to make some of us flinch, and for good reason: an angry, out-of-control parent can administer an all-out thrashing and claim to be engaging in “biblical discipline.” Is that what Proverbs is teaching?

Most of us, I think, can probably agree that at the very least, such texts teach that some form of discipline is necessary, and that the parent who refuses to set limits is being irresponsible (in the psychological literature, the term would be “neglectful” or overly “permissive”). The interpretive question is whether these texts  also teach that physical punishment through the use of a “rod” is necessary.

I don’t believe they do.

Take Proverbs 13:24 (above) as an example. Hebrew poetry makes extensive use of a form known as parallelism, in which two parts of a couplet say essentially the same thing from two points of view. Thus, the positive teaching (in the second part of the couplet) is that parents who love their children discipline them. The negative teaching (in the first part) is exactly the obverse: those who hate or fail to love their children “spare the rod,” i.e., don’t discipline them.

But note that this doesn’t mean that the rod itself is required as a means of discipline. Solomon may simply assume that the readers of his time and context would naturally associate the rod with discipline. In other words, I believe the sense of the first part of verse 24 is “If you don’t discipline your children, you show that you don’t love them (and for example, dear reader, that means you shouldn’t spare the rod)” not, “If you love your children, you must use the rod to discipline them.”

Similar arguments can be made for the other verses: they are not intended to establish a normative method of discipline for all parents for all time, but to reinforce the moral necessity of discipline in a time and culture where the rod was already taken for granted.

Kids need discipline and limits. That has never changed. The question is what form such discipline should take. I’ll address that question next Thursday in the final post of this series.