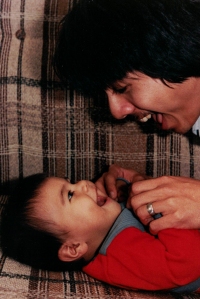 This is one of my favorite family photos. That’s me with my son, playing one of our tickle games. He’d lie on the couch and I’d hover over him, with his little hands in mine. Then I’d tickle him vigorously, making some nonsense noise like Chigga, chigga, chigga!  He’d cackle uproariously. We’d pause for a couple of seconds while he waited expectantly — then we’d do it again, over and over, until he tired of the game.

Oh, in case you’re wondering, the child in question is 32 years old now. The other child in the picture is 28. You can do the math from there.

What does this have to do with spanking? Nothing directly. But I want to remind us all that parenting isn’t just about discipline or fixing problems of behavior. It’s about building a bond of loving connection. It’s about learning to understand and appreciate what makes our children unique. It’s about forging a relationship in which kids come to know deep down that we can be trusted to be there for them and to have their best interests at heart.

That’s the foundation. And that’s the backdrop against which questions of discipline should be understood.

The question of whether to spank or not can’t be answered with a simple yes or no, for the more fundamental question has to do with the quality of the relationship outside the situations in which discipline may seem to be necessary. The kind of lasting influence that parents want to have in their children’s moral development doesn’t come by instilling fear. It comes through the consistency with which they demonstrate a patient and compassionate love.

Thus, in this final post of the series, I’m not about to recommend a particular parenting practice with which to replace spanking. Many would say, for example, that it’s much better to use “time-outs,” and in general, I would agree. But without loving patience, time-outs can be used badly, in a way that communicates, “Get out of my face, you miserable little sinner, until I’m willing to allow you into my presence again.”

Imagine if that were God’s attitude toward us.

As should be clear from previous posts, I am not in any way advocating that parents dispense with discipline or limit-setting. That would be patently unwise, from either a biblical or a psychological perspective. But as I also suggested, I find it sadly ironic that Christian parents would use texts from the Book of Proverbs to justify their harshly punitive behavior while missing the book’s overall call to humble wisdom.

Here’s an example of what I mean. We see Johnny do something wrong, and leap into action, certain that the child is in need of a strong dose of discipline. But haven’t we ever discovered, after losing our temper and yelling, that we misconstrued what was happening? We acted impulsively, impatiently, and in anger — all the things that we hope our children themselves will never do. Where is the humility or wisdom in that? Wouldn’t it have been better to listen first?

In a society that could be impatient with childishness, Jesus welcomed and embraced children. He was even angry with his disciples for standing in their way (Mark 10:13-16). Why? “Because the kingdom of heaven belongs to people like these children” (Matt 19:14).

What would discipline look like if Christian parents took that last statement to heart? What kind of discipline would be the best expression of that kind of kingdom?

Whatever it is, parents who follow Jesus should do that.