When Jesus heard that his beloved friend Lazarus of Bethany was ill, he stayed where he was for two days. At first blush, that might seem like odd or callous behavior. But Jesus knew that Lazarus was already dead. And even if no one else understood, he was intending to do something that was for everyone’s good.

Thus, he told the disciples, “Let’s return to Judea again” (John 11:7, CEB). “Judea,” not “Bethany” — the place where they were sure to face opposition. Only recently, the Jewish leaders in Jerusalem had threatened Jesus’ life (John 10:31), and now, he proposed to go back. Bethany was, after all, less than two miles from Jerusalem (11:18), and the disciples questioned Jesus’ wisdom (11:8).

Jesus’ response was a tad cryptic:

At one level, Jesus seems to be suggesting that if something needs to be done, it should be done while it’s still daylight. Time, in other words, is growing short. But at another level, he seems to be referring again to his earlier claim: “I am the light of the world. Whoever follows me won’t walk in darkness but will have the light of life” (John 8:12). There is both urgency and reassurance in his words: we must go, but you don’t need to be afraid as long as you are following the Light.

Then he tells them the purpose of their journey: Lazarus is sleeping and Jesus must wake him up (11:11). He means, of course, that Lazarus is dead and must be raised back to life. But as happens so often in John’s gospel, the metaphor is misunderstood. The disciples think that if Lazarus is sleeping, the worst of the sickness has passed and he’s getting better (vs. 12-13).

So Jesus tells them explicitly that Lazarus has died (vs. 14), and then adds this note: “For your sakes, I’m glad I wasn’t there so that you can believe” (vs. 15). 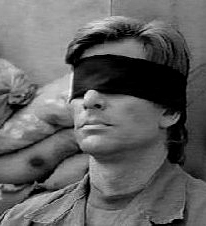 At that point, the right question to ask is, “Um, excuse me? What is it you want us to believe?”

But nobody asks. They miss the point. Instead, the disciples seem to resign themselves to the fact that Jesus is determined to go back into the jaws of death. Bravely, Thomas speaks on behalf of the others: “Let us go too so that we may die with Jesus” (vs. 16). He sounds like someone preparing to face a firing squad.

Their bravery is admirable. But as of yet, it’s a blind bravery. They think they’re about to face the ultimate test of loyalty, but Jesus knows better. The worst is yet to come. And what they’ll need more than anything else is faith.

As he has already said:

They are beginning to understand that Jesus is willing to give up his life, on his own initiative.

But they don’t yet understand what it means for him to “take it up again.” For them to believe that, they’ll need to see that he has the power over death itself.