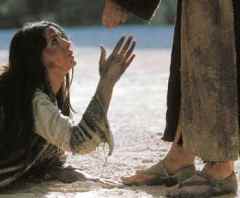 The story of the woman “caught” in adultery (I’ll explain the scare quotes in the next post) poses a bit of a puzzle. Most contemporary Bibles will have John 7:53-8:11 marked off in some way, suggesting that the story may not belong here, possibly not even in the gospel of John at all. What gives?

We live centuries after the invention of the printing press, in a world in which texts can be created electronically and immediately distributed verbatim across the entire planet (which can be both a blessing and a curse). It’s hard to imagine a world without so much as a Xerox machine, in which writing is a special skill and texts have to be copied by hand.

That, however, is the world of the Bible. It would be nice if we actually had one manuscript of John’s gospel, unmistakably signed by his own hand, from which we could Xerox exact replicas. But we don’t. Instead, we have numerous hand-copied manuscripts, some of which seem older and more reliable, some less.

The problem is that some New Testament manuscripts have the story here, while some locate it elsewhere in John, or even in Luke — and many don’t have it period. It’s as if copyists had the story by itself and had to figure out where to put it.

If the story does belong to John, many would argue that this is an odd place for it. Read chapter 7 up to verse 52, then skip to 8:12 and keep going. No problem, right? It flows naturally. The argument between Jesus and his opponents continues, with some of the same themes being repeated.

But dropping in the story of the woman makes for an odd interruption. John 8:9 says clearly that all of the woman’s accusers had walked away and Jesus was left alone with her. But in verse 12, he’s back arguing with the Pharisees. Did they come back? Were Jesus and the woman not really “alone”? And so on.

And yet… if there’s a problem with where the story belongs (there are good reasons for thinking it belongs to Luke), I think most would agree that the story itself sounds authentic. There is compassion for sinners, a radical expression of grace that maintains a high regard for the Law, and a call to repentance — all things we’ve come to expect from Jesus.

And, unfortunately, the story also describes what we’ve come to expect from his opponents. More on that in the next post.