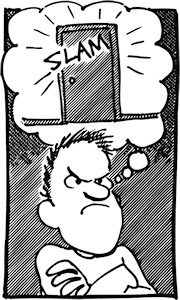 You know how it goes. When someone decides they don’t like you, for whatever reason, it’s like a door in their mind slams shut. You can protest all you want, but to no avail: they’re not listening anyway.

So let’s be honest: we’ve done the same to others, haven’t we? We shut them out. We close the door to further input or interaction. We’ve made up our minds, and that’s that.

Maybe it’s a stretch, but that’s what I think of when reading Luke’s account of the riot in the Jerusalem temple.

As we’ve seen, the Ephesian Jews who viewed Paul as a heretic stirred up trouble during the festival of Pentecost, when the city was packed with pilgrims. Already predisposed to think the worst of Paul, they loudly accused him of defiling the temple by bringing Gentiles into it, though they had no evidence of this whatsoever.

The crowd, for their part, needed little prompting to deteriorate into a violent and murderous mob. Luke writes:

Then all the city was aroused, and the people rushed together. They seized Paul and dragged him out of the temple, and immediately the doors were shut. (Acts 21:30, NRSV)

The emotional contagion spread quickly from person to person in every direction; people came running to join the fray. Paul was seized, and dragged bodily out of the inner court of the temple to the outer court, the court of the Gentiles. Someone quickly closed the door (which some identify with the so-called “Beautiful Gate”) behind him, lest the inner courts be contaminated further. Who knows what Gentiles might be lurking about?

Paul was being accused of a capital crime. The defilement couldn’t be scrubbed away, not even with buckets of hand sanitizer. The perpetrator had to be executed. And according to the historian Josephus, the Romans would probably have let them do it.

In the story, irony is piled on top of irony. Paul is in the temple completing a purification ritual — but he’s falsely accused of defiling the temple by people who think they have the high moral ground. The Romans might allow the Jews to execute a person for religious reasons — but the one thing they won’t allow is a riot. Just get rid of the man quietly, and we’ll look the other way. But create a ruckus? We’ll have to step in.

We’ll see how they intervene in an upcoming post. For now, we can note that when Luke says “immediately the doors were shut,” there may be more to his words than just their surface meaning.

Remember, Luke is writing — after the fact — about events leading up to a disastrous war with Rome, in which Jerusalem is captured and the temple destroyed. Everything that happens in the story is pregnant with meaning. This is the last time, in Luke’s narrative, that Paul will see the inside of the temple; soon there will be no more temple, period. From that perspective, the phrase “the doors were shut” takes on a more ominous tone, symbolizing the hardness of heart that foreshadows the coming destruction.

I’m reminded here of Jesus’ words in Luke’s gospel. It’s Palm Sunday. Jesus is riding a donkey’s colt into Jerusalem, to the roaring acclamation of the crowds. But as he nears the city, he weeps over its fate:

If you, even you, had only recognized on this day the things that make for peace! But now they are hidden from your eyes. Indeed, the days will come upon you, when your enemies will set up ramparts around you and surround you, and hem you in on every side. They will crush you to the ground, you and your children within you, and they will not leave within you one stone upon another; because you did not recognize the time of your visitation from God. (Luke 19:42-44)

And the very next episode that Luke narrates?

Jesus enters the temple and cleanses it.

No doubt, the Ephesian Jews who started the ruckus in the Jerusalem temple were not believers and resented the gospel Paul preached. But here’s the disturbing part of the story. If we take seriously James’ earlier warning to Paul, then surely some of the people who were rioting against Paul were  believers — people who acknowledged Jesus as Messiah but rejected Paul’s ministry to Gentiles.

Luke doesn’t say this directly, of course. But neither does he disabuse us of the idea, and given the way he tells the story, it seems more likely than not that at least some Christians were involved in the violence against Paul.

Think about that for a bit.

Then ask yourself what doors you may have slammed shut, for what might seem like the best and most religious of reasons.

One thought on “A door slams shut”