Anyone committed to ministry knows that opportunities for service abound. Needs are everywhere. People may want your time and input on a variety of matters, all worthy in themselves. You can’t say yes to everything; there have to be priorities.

Even the apostle Paul, who suffered greatly for the gospel, who gave body and soul to the work, knew this, as we shall see.

These days, well-written travelogues can become best-sellers. One thinks, for example, of Elizabeth Gilbert’s Eat, Pray, Love (2006) or Cheryl Strayed’s Wild (2012). Both have been made into movies (starring Julia Roberts and Reese Witherspoon, respectively). For these stories to succeed, one expects to be served up some lush scenery, a dash of adventure, and an epiphany or two — the general recipe for this genre’s version of character transformation.

By such standards, there are segments of Luke’s travelogue in Acts that fail miserably.

In Acts 20, for example, all we get is a bare bones itinerary that reads like it was stitched together from hastily written journal entries (and probably was): we went here, then we went there, then we went way over there. It makes a contemporary reader want to say, Come on, Luke, tell us more. What did you see? What did you eat? What was the weather like? Didn’t anything interesting happen while you were there? But no.

In a recent post, I noted how the miracle story of Paul’s bringing Eutychus back to life in Troas was firmly embedded in the very ordinary story of Paul droning on for hours on end. And after Troas, the ordinariness of Luke’s narrative continues:

We went ahead to the ship and set sail for Assos, intending to take Paul on board there; for he had made this arrangement, intending to go by land himself. When he met us in Assos, we took him on board and went to Mitylene. We sailed from there, and on the following day we arrived opposite Chios. The next day we touched at Samos, and the day after that we came to Miletus. For Paul had decided to sail past Ephesus, so that he might not have to spend time in Asia; he was eager to be in Jerusalem, if possible, on the day of Pentecost. (Acts 20:13-16, NRSV)

Before Paul left Troas, he had already decided to go on foot to Assos, a 20-mile walk south. Luke doesn’t tell us why, nor does it seem to be important. Luke himself, meanwhile, together with Paul’s other companions who were helping escort Paul and the collection for the poor to Jerusalem, made the journey to Assos by sea. Though the distance was greater, they arrived ahead of Paul. 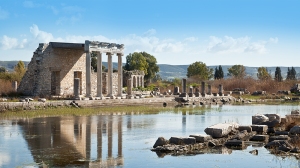 Luke’s travel narrative here is brief and to the point. Paul boarded the ship in Assos; the group sailed to Mitylene, the capital of the island of Lesbos; then to some point across from the island of Chios (where Homer was born); then to the island of Samos (where Pythagoras was born); and finally, to the port city of Miletus, about 30 miles south of Ephesus.

The one point of interest in the tale is this: Paul sailed right past Ephesus, the city where he had spent three years in ministry and had many friends and associates. Why?

To be sure, Ephesus was not a safe place for Paul to be. One can hardly blame him for not wanting to spend more time in a place that left him feeling crushed with despair (2 Cor 1:8). And even if he didn’t fear for his safety, he knew realistically that there would be no way for him to simply pop into the city and then back out again. The community would draw him back in, and he had other plans.

Those plans included getting the collection to Jerusalem by Pentecost, a sea voyage that would take between two and three weeks. Why the rush? Why Pentecost? Again, we’re not told. Paul may have told Luke his reasons, but if so, Luke hasn’t passed them on. One might guess, though, that it had something to do with both (a) the symbolic importance of Pentecost in the life of the church, and (b) the gospel opportunities of a city packed with pilgrims.

The point is that Paul was clear about his priorities. He knew that he needed to have a final meeting with the recently appointed elders of the church in Ephesus, because he would not be back, and wanted to encourage them. Having them make the 30-mile trek to Miletus would cost time — but not as much time as setting foot in Ephesus himself.

Getting to Jerusalem was the priority, and time was of the essence. Paul, no doubt, was following the marching orders he believed he had received from God through the Holy Spirit. His ministry in Ephesus was over, and it was time to put the reins of that ministry firmly in the hands of the Ephesian elders.

Such transitions of leadership have always been delicate matters. We’ll see how Paul handled it in the next post.

One thought on “Priorities”