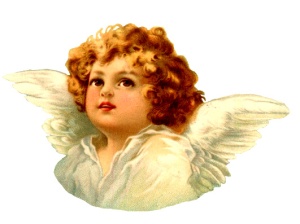 Angels. In popular art and imagination, they’re often depicted as Gerber babies with wings. When we say that someone has the “voice of an angel,” we mean a singing voice that is melodic and sweet. A woman with the “face of an angel” (does anyone ever say that about a grown man?) would have features that are soft, delicate, and beautiful.

Ya think? You wonder if angels have ever had to coax people out from under their beds.

What does Luke mean, then, when he tells us that as Stephen was about to give his testimony, the members of the Sanhedrin stared at him and “saw that his face was like the face of an angel” (Acts 6:15, NRSV)?

Surely not that his face belonged on a jar of baby food.

More likely, Stephen was still filled with the Holy Spirit (Acts 6:10; 7:55) as he prepared to speak. And somehow, in his face, the council saw a reflection of the glory of God.

There’s precedent for this, of course. One thinks of Moses, who spoke with God “face to face” (Exod 33:11). For forty days and nights, Moses spoke with God on Mount Sinai as he received the commandments for a second time on a new set of stone tablets. When he came down, “Moses did not know that the skin of his face shone because he had been talking with God” (Exod 34:29). Frightened, everyone gave him a wide berth — even his brother Aaron.

It would probably be too much of a stretch to suppose that Stephen’s face actually glowed. But it seems likely that Luke had the story of Moses in mind, and that he wanted his reader to know that the Sanhedrin, for all their righteous indignation, sensed that they were in the presence of the holy.

If that’s so, it deepens the tragic irony of the story. Stephen’s face somehow reflected the divine, as Moses’ had. Yet he stood falsely accused of uttering “blasphemous words against Moses and God” (Acts 6:11), and of seeking to undermine “the customs that Moses handed on to us” (vs. 14).

Moreover, Moses will play a prominent role in Stephen’s testimony as he retells the story of God’s people. I can imagine the Sanhedrin nodding in agreement during the first half of Stephen’s story, perhaps even thinking, “Hmm. I haven’t heard anything blasphemous so far.”

That is, until Stephen characterizes the Israelites as disobeying both Moses and the Law, as the people who perpetually persecuted and killed the prophets, as the ones who murdered the Messiah.

That’s when the council will decide they’ve heard enough.

We’ll look more closely at Stephen’s testimony in upcoming posts. For now, it’s worth reflecting on the situation Luke describes. As the persecution, arrest, and execution of both Jesus and Stephen show, it’s possible to be in the presence of the holy and want to kill it. It’s possible to love our lies so much that we’ll do whatever it takes to destroy the truth.

And self-righteous violence is the sign of such idolatry.

One thought on “The face of an angel”