Okay, show of hands. How many of you have ever had bad service at a restaurant? 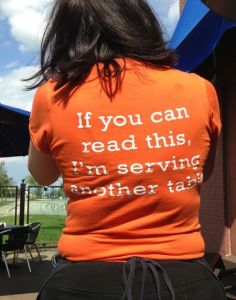 Of course, we could just as easily flip the question around. For those of you who have ever waited tables, or perhaps worked the counter at a fast-food joint, how many of you have ever had annoying, unreasonably demanding customers?

I see those hands too.

It’s reasonable to expect decent service from someone called a “server.” But as paying customers, it’s easy to forget that servers don’t walk the earth merely to cater to our needs. They are people with their own needs, their own gifts, and their own stories to tell.

Many of my graduate students, for example, have waited tables at one time or another. But I doubt many of their customers thought to themselves, “She’s going to be an incredible therapist someday,” or “That guy’s going to be a great pastor.”

Even if they remembered to bring the salad dressing on the side.

In the book of Acts, Luke introduces us to a man named Stephen, a Greek-speaking Jew who believed Jesus to be his Messiah. Luke describes him as “a man full of faith and the Holy Spirit” (Acts 6:5, NRSV), though Stephen enters the story merely to wait tables in the daily distribution of food to the poor.

If someone were to tell the tale of a skid-row soup kitchen, you wouldn’t expect the guy with the ladle to do anything particularly remarkable. But this is the Bible. Anything can happen.

In case we weren’t paying attention, Luke tells us that Stephen is not only full of faith and the Holy Spirit, he’s “full of grace and power” and “did great wonders and signs among the people” (Acts 6:8). That probably means that he did miracles of healing, which would certainly have raised his esteem in the eyes of the people. That’s the good news.

The bad news, as we’ve seen, is that the story has already taken a somewhat dark turn. Persecution is increasing. At first, just Peter and John were arrested and let off with a warning. Then all the apostles were arrested, and eventually beaten. Now what? Anyone who reads much heroic fiction would expect things to get even worse for the good guys before they could win the final, climactic battle with the bad guys.

Spoiler alert: at the end of the story, good will indeed triumph over evil. But in terms of the biblical story, that still hasn’t happened yet, and it won’t until after Jesus returns. Meanwhile, things do in fact get worse for his followers.

It starts simply enough. Stephen, apparently, has been speaking out in the so-called “Synagogue of the Freedmen.” This would have been a synagogue comprised of Diaspora Jews who had been taken as slaves by the Roman Empire and eventually given their freedom. They were from the cities of Cyrene and Alexandria (in modern-day Libya and Egypt, respectively) and the Roman provinces of Cilicia and Asia (both in modern-day Turkey).

Of particular interest is Luke’s mention of Cilicia. Its capital city was Tarsus, the birthplace of Saul, the man who would become the apostle Paul. Was Saul present when Stephen spoke out in the synagogue? If so, it would help explain why he later approved of Stephen’s death (Acts 8:1).

We have no way to know the content of the freedmen’s argument with Stephen. But we do know that they were unable to best him in head-to-head debate, because Stephen was empowered by the Holy Spirit as Jesus had promised (Acts 6:10; Luke 12:11-12).

Nobody likes to lose. So Stephen’s opponents tried another tactic:

Then they secretly instigated some men to say, “We have heard him speak blasphemous words against Moses and God.” They stirred up the people as well as the elders and the scribes; then they suddenly confronted him, seized him, and brought him before the council. They set up false witnesses who said, “This man never stops saying things against this holy place and the law; for we have heard him say that this Jesus of Nazareth will destroy this place and will change the customs that Moses handed on to us.” (Acts 6:12-14)

To summarize: Stephen’s opponents try to beat him in public debate and can’t. Filled with self-righteous indignation, they pressure people to tell lies about him, accusing him of blasphemy. They go around stirring up the people against him, drag him before the ruling council, and set up false witnesses to testify that he threatened the Temple.

It should, as we’ll see in the next post.