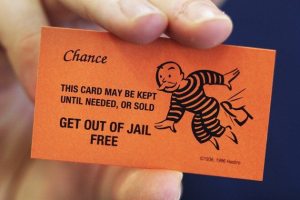 I never really cared much for the game of Monopoly. We had one as kids, but rarely played it. The game could go on for hours, and we would tire of it long before someone actually went bankrupt.

The true die-hard Monopoly players are the ones who strive to snatch up the most expensive properties on the board and load them up with hotels. Then they wait to pounce. Some poor sucker lands on Boardwalk, and the owner cackles with hand-rubbing evil glee. Fork it over, loser! I win!

Nope. Don’t want to be on either end of that transaction.

But I did like the “Get Out of Jail Free” card. I hated getting stuck in that stupid jail for turn after turn, daydreaming about how much fun it would be to sort out my sock drawer. The card saved me.

In real life, of course, having to languish in jail is no game, especially for those who are innocent. Hundreds are incarcerated for crimes they didn’t commit. The poor and the marginalized among them can’t afford the legal counsel they need, and public defenders don’t get paid enough to do all the digging needed to fight a frequently unjust system.

There’s no “Get Out of Jail Free” card.

But there is a God who saves.

In the days immediately following Peter and John’s arrest and release, the ministry continued to grow. The apostles’ reputation for miracle-working had spread, and people came to Jerusalem from miles around for healing.

The number of believers continued to grow, and they continued to meet in the section of the Jerusalem temple known as Solomon’s Portico. On strictly practical grounds, one might imagine this was in itself an administrative concern for the temple authorities.

But of course, their concerns went far beyond the practical. They felt threatened by a movement that was growing so quickly right under their noses, and decided to do something about it:

The high priest, together with his allies, the Sadducees, was overcome with jealousy. They seized the apostles and made a public show of putting them in prison. An angel from the Lord opened the prison doors during the night and led them out. The angel told them, “Go, take your place in the temple, and tell the people everything about this new life.” Early in the morning, they went into the temple as they had been told and began to teach. (Act 5:17-21, CEB)

Here again was Caiaphas, who earlier had so arrogantly thought he had the solution for the Jesus problem. Now, he had to deal with Jesus’ followers.

He and his fellow aristocrats, the religious party of the Sadducees, were “jealous” of the movement. Luke’s word, literally, is “zeal.” As the keepers of the Temple traditions, their job was to be zealous for the Lord, zealous for his Law, zealous for his holiness. But as often happens when politics and religion mix, they had become zealous to protect their power, position, and privilege. They saw what the apostles were doing — right there in the Temple! — and decided to make an example of them.

So they grabbed the apostles, all of them, and made them do the perp walk.

Peter and John had, after all, been warned to stop teaching in Jesus’ name (Acts 4:18). They didn’t listen. So Caiaphas and his cronies felt perfectly justified in arresting the lot and throwing them in jail.

The angel (whom, for some reason, I want to call “Brick”) was sent to get the apostles out. We might imagine that news of the arrest had reached all of the believers, and they were praying for the apostles’ release. But I’m reminded again of the prayer of the believers in Acts 4, after Peter and John’s first arrest and their subsequent safe return. They didn’t pray, “Thanks for keeping them safe!” Nor did they pray, “Please, Lord, don’t let this happen again.” They prayed, “Enable your servants to speak your word with complete confidence” (vs. 29).

Thus, Brick didn’t bust the apostles out and tell them to take a well-earned vacation. Instead, they were to go right back to work, preaching the gospel of life and newness in the face of opposition and the threat of another arrest.

And that’s just what they did, starting first thing in the morning. Back in the temple, they continued to speak God’s word of new life. They did so with complete confidence.

After all, who’s worried about jail time when you serve a God who can get you out of jail, free?