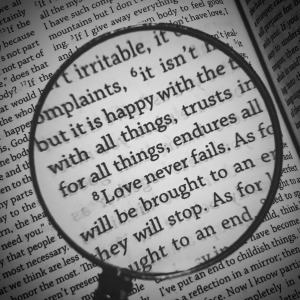 Over the last several weeks, we’ve taken a close, extended look at Paul’s teaching about love in 1 Corinthians 13.  It begins with remembering the patience and kindness of God, then letting go of things like envy and arrogance, a selfish insistence on one’s rights, and the corrosive combination of irritability and resentment. Most of what Paul describes is how love doesn’t behave, to correct how the Corinthians are in fact behaving.

As the description reaches its climax, Paul writes that love “does not rejoice in wrongdoing, but rejoices in the truth. It bears all things, believes all things, hopes all things, endures all things. Love never ends” (1 Cor 13:6-8, NRSV).

To an inquisitive mind, that first sentence may sound a bit strange. Who really rejoices in wrongdoing, other than the one-dimensional evil villains of B-movies and pulp fiction? And shouldn’t the second half of the sentence say that love rejoices in “right-doing” or righteousness? Why does he set “truth” against “wrongdoing”?

(That’s what you were wondering, right?)

A full answer would take up quite a bit of space, but here’s the short version: what Paul is emphasizing is that love is a celebration of the gospel.

For Paul, the word “truth” often refers to the gospel. Moreover, in the New Testament, the verb “to rejoice” is typically not just about garden-variety gladness but associated with the joy of the gospel. And as Paul says elsewhere, those who reject the truth embrace wrongdoing instead (Rom 2:8; 2 Thess 2:12).

Rejoicing in unrighteousness doesn’t have to mean intentionally inflicting suffering on others with a maniacal laugh (though that would certainly count). The Corinthians were doing wrong to each other, and possibly even feeling a little self-righteous in the process. Nobody was trying to take over the world. But they were rejecting love.

And in doing so, they were failing to embrace the gospel.

Think about it: could it be that so many of the problems we experience in our relationships come from a failure to celebrate the full truth of the gospel?

Love “rejoices in the truth,” Paul declares. I like to think of that as “celebrating the gospel.” The translation above makes it sound like Paul is using the same verb twice — “rejoice” — while some translations make it seem as if two entirely different words are used. Literally, however, if we translate the first verb as “rejoice,” then the second should be rendered as “rejoice with,” or “rejoice together,” or even “co-rejoice.” Love rejoices in community in celebration of the gospel.

That means a gospel party.

In Luke 15, Jesus tells three parables of being lost and found. A sheep is lost. When the shepherd finds it, he rejoices (vs. 5) — and then calls his neighbors together to “co-rejoice” with him (vs. 6). Similarly, a woman calls her neighbors to “co-rejoice” when she finds her lost silver coin (vs. 9).

And in the longest and most elaborate of the parables, a son is lost and then found, leading again to much rejoicing (vs. 32). Jesus doesn’t use the verb “co-rejoice” here, but the point has already been made. He tells three stories of the lost being found, and the result is three parties. This is Jesus’ picture of the joy in heaven over those who receive the gospel and repent (vs. 10), who turn from death to life (vs. 32). It’s the reason he fellowships with tax collectors and sinners (vss. 1-2); he wants them to join the party.

Envy and braggadocio. Backbiting and resentment. Putting one’s desires ahead of the well-being of others. These things had to stop in Corinth. And they have to stop with us.

But Paul doesn’t crack the whip here; he gives them a vision of something higher, something to grab their attention and imagination. He himself believes in rigorous discipline in the Christian life (e.g., 1 Cor 9:24-27), but here he invites them to a party, a gospel party.

Love is begotten in the liberating celebration of the gospel: of the truth of who God is, of what he has done in his Son, and who we are because of it.