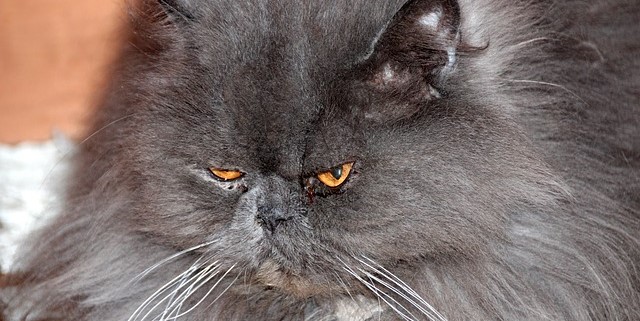 Ooh, I know that face…

Recently, in an email, I suggested to a colleague that I was being grumpy about the subject at hand. “You? Grumpy?” she responded, as if that would never happen. She wasn’t being sarcastic (which would really have made me grumpy). People just tend to think of me as easy-going. I’ve had that reputation since I was a kid.

What people don’t know, however, are the silent thoughts going through my head.

Or even what I say out loud to other drivers when I’m in the car by myself.

Take my word for it. I can be grumpy.

As we’ve gone through 1 Corinthians 13 in recent posts, I’ve suggested that Paul’s teaching should be understood not as an abstract reflection on the nature of love, but a pastoral response to the specific ways the Corinthians were mistreating each other. Some were envious, while others were boastful and proud. Some were acting in rude or socially inappropriate ways that offended the conscience of others, selfishly insisting that they were only doing what they had the right to do.

That, Paul insists, is not the way of love.

When Paul then says that love is not “irritable or resentful” (1 Cor 13:5, NRSV), however, he may not have a specific incident or behavior in mind. But it’s easy to imagine that with all the problems and conflicts in that congregation, irritability and resentment were the only things everyone shared in common.

The word translated as “irritable” is a rare one, occurring only twice in the New Testament. The only other use of it is in Acts 17:16, where Luke describes Paul as being “deeply distressed” at finding the city of Athens filled with pagan idols. At root, the word suggests something sharp. We might think of the pointedness of a provocation and the emotional reaction that comes with it. In English, for example, we speak of being “stabbed in the heart,” “cut to the quick,” or “needled.” There is also the sharpness of our response. Indeed, the word Paul uses is the root of the English word “paroxysm” — a sudden fit of anger or rage.

The type of irritability Paul is referring to, then, is probably more than mere grumpiness. That’s just the less caustic end of the continuum, where people are predisposed to think the worst. But they also may have become touchy and overreactive. Given their past hurt, they are easily provoked to anger.

For their part, the supposed provocateurs may feel that they’ve done nothing to warrant such a response. Now they are provoked to anger. Back and forth it goes, each feeling like the injured party, each getting angrier with every exchange, each feeling more justified in their righteous indignation.

Sound familiar? You don’t have to be a Corinthian to know what it’s like to ride that merry-go-round.

And underneath that problem cycle is a more basic truth: we human beings tend to have a long memory for the ways others have hurt us. More on that in the next post.