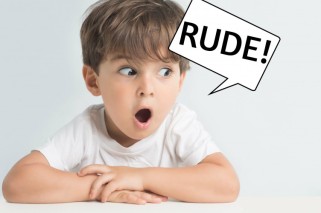 “Love isn’t rude.” Gee, Paul. That’s pretty obvious, isn’t it? Might as well say, “If you love someone, don’t be obnoxious to them.”

But that was part of Paul’s challenge and frustration as a pastor: what might sound obvious to us wasn’t obvious to the Corinthians.

Nor, once we understand what Paul is saying, might it be as obvious to us as we first thought. When we think of someone as rude, it’s usually because they’ve offended us by neglecting some common courtesy. They cut in line. They snatched the last piece of pie. And they stuck out their tongue as they did it.

So when Paul says that love isn’t rude (1 Cor 13:5, NRSV, CEB), does that mean we shouldn’t stick out our tongues, or belch at the dinner table?

Sort of. But in the context of the Corinthian church, there was much, much more at stake than common courtesy.

The word Paul uses is difficult to translate into English. The NIV has that love “does not dishonor others,” while the NASB has that love doesn’t “act unbecomingly.” Literally, the word means something like “bad form,” suggesting some kind of inappropriate behavior (see also the various translations of 1 Cor 7:36, where Paul uses the same word). Linking it with our usual concept of rudeness, we can preserve three things: (a) there’s a known line that shouldn’t be crossed; (b) someone’s crossed it; (c) in doing so, they’ve offended someone.

Some offenses are relatively harmless. Someone does something thoughtless; the other takes umbrage, mutters something colorful and walks away. In Corinth, however, people were getting hurt in ways that threatened their spiritual health. That’s why Paul had to tell them to stop being rude, to stop acting inappropriately. What was happening?

Here’s one way to think about it, in more contemporary terms. Imagine that the local strip club also has the best steak dinner in town. Two of the regular patrons there have become believers. One claims that he’s been so transformed that he wants to return to the club as an evangelist — and, of course, to enjoy a nice juicy ribeye or porterhouse.

The other man, however, doesn’t believe that it’s possible to go back to the club without being pulled back into the hard-drinking, hard-partying lifestyle he’s tried to leave behind. The first man pooh-poohs the idea as being a mark of the second’s spiritual immaturity, and provocatively invites him to come along.

Something like this was probably happening in Corinth, as new converts tried to figure out how to deal with their old pagan habits. Do you keep going to pagan temples or not? Do you eat meat sacrificed to idols or not? Some believed that they were free to do what they wanted without risk, but others had more delicate consciences.

If you think the first guy in the illustration above is just kidding himself, you’re probably right. But even if he isn’t, Paul’s point is that love must still be the first priority. For Believer # 1 to offend the conscience of Believer # 2, to tempt him into backsliding, is anything but loving.

The point is reinforced by what Paul says next: love doesn’t “insist on its own way” (1 Cor 13:5, NRSV) or “seek its own advantage” (CEB). We’ll tackle that in the next post.