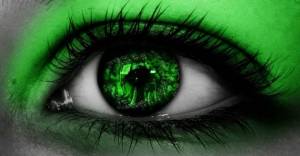 Here’s a question for you. Honestly speaking, of whom are you jealous?

It might be now or in the past.  And I don’t necessarily mean the obsessive, can’t-sleep-at-night kind of jealousy. We can be jealous in small ways. If others have what we want, perhaps even what we think should belong to us, we’re tempted to resent them.

Your English teacher (and perhaps your therapist) would distinguish between envy and jealousy. We are envious when someone else enjoys some good fortune that we want for ourselves. A co-worker gets a promotion or some other recognition, and we don’t. We could use the money or we crave the recognition, so we envy the other.

But if we also believe the promotion should have been ours, that the other person received something that rightfully belongs to us, we feel jealousy instead. Thus, for example, we may envy someone else for the relationships they enjoy, but feel jealous when they start to horn in on ours.

Paul teaches the Corinthians that love isn’t “jealous” (1 Cor 13:4, CEB). But other translations say that love isn’t “envious” (e.g., NIV, NRSV). They don’t mean quite the same in English, so which is it? Jealousy or envy?

In general, the word Paul uses is best translated as “zealous,” not jealous. It suggests the eager pursuit of a goal — which can be a good thing, depending on the goal. Just a few verses earlier, for example, Paul tells the Corinthians to “strive for the greater [spiritual] gifts” (1 Cor 12:31, NRSV), or “eagerly desire” them (NIV). Paul, in other words, wants them to be “zealous” for spiritual gifts. And indeed, they already are.

But something’s gone wrong. Their zeal has become misplaced. On the surface, it might look like the Corinthians are eager new believers wanting to grow in their spirituality. Below the surface, however, what they really want is something else: bragging rights. They want to know which spiritual gift is the greatest, not because they want to use it to selflessly serve the church, but because to possess it would mean greater prestige and a higher social standing.

They’re playing a game in which there must be winners and losers. And what Paul suggests here is that even the losers are failing at love.

“Love isn’t jealous.” To what situations, attitudes, and behaviors might Paul be referring? We know from the rest of the letter that the Corinthians were a competitive bunch. They argued over which church leader to follow. They sued one another in court. And they disagreed over spiritual gifts, to the extent that some members of the church were left feeling they didn’t belong because they didn’t have the right gifts.

I imagine, though, that it didn’t end there. People don’t just feel sad because they think they’re at the bottom of the heap. Often, they actively resent being put there, and the bitterness comes out in small ways or large.

For example, we might watch someone standing in front of the congregation to preach or to sing, and think to ourselves, “Heck, I could do better than that.” At best, the thought is disrespectful. At worst, it might set off a whole train of negativity: Why them and not me? The leadership here is blind and incompetent. If we keep thinking that way, we may actively begin to undermine and discredit people through our words and behaviors.

That, of course, is not love.

And neither is the attitude and behavior that comes from the other side, from those who see themselves as the winners in the game. We’ll take a look at them in the next post.