“Blessed are the meek,” Jesus once taught, “for they will inherit the earth” (Matt 5:5, NRSV). Like the other verses surrounding it, this one sounds paradoxical. How can a kingdom belong to the poor in spirit (vs. 1)? How can those who mourn be called blessed (vs. 4)?

The paradox, however, is partly a product of our dependence on worldly ways of thinking. The corrective is to learn not only from the words of Jesus, but the life of Jesus. In fact, we need to learn from the death of Jesus. And part of that seemingly paradoxical lesson must be this: some goals aren’t achieved by the assertion of power. 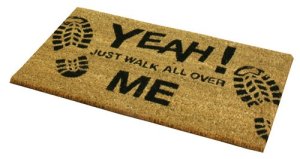 The word “meek” may conjure images of people who have no power or influence, who let others step on them like human doormats. In contrast, you may have heard someone insist that “meekness is not weakness” — that meekness is not the lack of power, but the willingness to forego using the power you have in order to achieve a higher goal.

I think that’s right, as far as it goes. It should also be said, however, that when Jesus describes the meek as being blessed, he does in fact mean those who, in the eyes of society at least, have little to no power or status (if you doubt that, compare the parallel passage in Luke 6:20-26). They are blessed because they have a God who champions their cause, who cares about justice for widows and orphans, about the plight of the marginalized and powerless.

Jesus demonstrated that kind of divine mercy in the way he lived.

And just as importantly, he demonstrated it in the way he died.

As we have made our way through the gospel of John, we’ve noted over and over how Jesus insisted that he had been sent by the Father to accomplish his purposes. Time and again, he performed powerful, eye-popping, miraculous signs that witnessed to the truth of that claim. And fresh off the most stupendous miracle of all, the raising of Lazarus from the dead, Jesus and his disciples entered the jam-packed city of Jerusalem to the roar of the crowds.

Talk about power and influence. You can’t really blame the disciples for having high expectations of what would happen next.

But then things began to go horribly, unexpectedly wrong. In the garden, Jesus let himself be arrested and bound, even as Peter flailed away uselessly with a sword. I imagine that all through the humiliating and torturous events of the next day, the disciples wondered when Jesus would fight back. But he didn’t. In the end, he died in futility and shame on a Roman cross.

At least, that’s how the story must have seemed on Saturday. It’s not much of an ending. Superman didn’t shake off the Kryptonite, and died like a regular Joe? I want my money back.

Jesus, however, had already openly declared that in obedience to his Father, he would lay down his life of his own accord (John 19:17-18). “I have the power to lay it down,” he announced– a curious thing to say based on any worldly understanding of power.

Jesus not only had power, he had the power not to use his power.

That does sound paradoxical, doesn’t it?

Let’s see if we can sort it out in the next post.