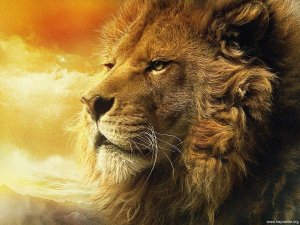 There’s a scene in C. S. Lewis’ The Lion, the Witch, and the Wardrobe in which the great lion Aslan is taken captive by the White Witch. At first, the Witch’s minions are afraid to approach him, for they know his power. But Aslan offers no resistance, and they are emboldened. Not only do they seize and bind him, they begin to taunt and jeer like schoolyard bullies.

From their hiding place, Lucy and Susan watch in horror. They know that Aslan could defeat them all with just a few swipes of his powerful paws.  Why doesn’t he do something? they wonder. How can he just let this happen?

Wait — I have a sword! Well, we’re not going down without a fight…

Then Simon Peter, who had a sword, drew it and struck the high priest’s servant, cutting off his right ear. (The servant’s name was Malchus.) Jesus told Peter, “Put your sword away! Am I not to drink the cup the Father has given me?” (John 18:10-11, CEB)

Poor Peter. Ready to fight and die like a man, but less ready to listen to what Jesus has been trying to teach him. Here, he acts more like a Roman than a disciple, living by the sword and ready to die by the sword (cf. Matt 26:52). But he’s a fisherman, not a soldier, and manages nothing more than to cut off a servant’s ear (he probably would have done better attacking them with a fishing net). And adding insult to injury, Jesus doesn’t say, “Thanks for trying, O brave one” — Peter gets a scolding instead.

Jesus had spent their last moments together telling Peter and the others that he was leaving them, and they would have to carry on without him. And here in the garden, Jesus was no cowering fugitive. He was the Son of God and acted like it, taking control of the situation and giving himself up in obedience to the Father.

For all that, for all his belief and trust in Jesus, Peter was still acting from a different script. That’s not to say that he thought for a moment that he could single-handedly defeat a whole garrison of soldiers. But he still seemed stuck in a narrative in which God’s purposes were to be accomplished by worldly means, even by the power of violence. And to the extent that he saw Jesus as an unwilling victim, his view of the situation was upside-down.

He’s not alone. Consider poor Malchus. Other than what we read in the gospels we know nothing more of the man. But many of the people John names in the gospel eventually become Jesus’ disciples. We know from the other gospel accounts that Jesus healed Malchus’ ear. One wonders: did this servant of Caiaphas come to the garden expecting what the high priest told him to expect, only to encounter the Son of God instead?

Or take Caiaphas himself. John describes him as “the one who had advised the Jewish leaders that it was better for one person to die for the people” (18:14). John seems to revel in the irony; Caiaphas is right in a way that is utterly wrong. Caiaphas believes in his own power and cynically recommends that which is politically expedient; he is blind to the role he is playing in the larger story of what God is doing in and through Jesus.

When we are confronted with trouble, we have to make sense of it. Generally, we will do so in terms of the stories we think we’re already living, stories about how and why things happen, about how we must use our own power and knowledge to accomplish our ends.

But every once in a while, if we are open to it, God takes us by surprise. We find that our stories are limited; there is more to what God is doing in the world than we ever imagined.

So here’s the question: what sword is Jesus asking us to put away? What have we tried to accomplish by means of force or power when we should be waiting and trusting instead?