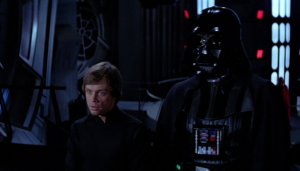 Most Americans of my generation (and many of their children!) can probably recall the scene from 1983’s Return of the Jedi in which Darth Vader brings Luke Skywalker before the Emperor. “Your overconfidence is your weakness,” Luke says with… um… confidence. To which the Emperor replies with impatience (say it with me now), “Your faith in your friends is yours.”

Jesus’ disciples could sometimes act like an overconfident bunch. You have to give them credit for their willingness to throw in with Jesus no matter what, even when they haven’t a clue what’s happening. There’s the scene in John 11: Master, don’t go back to Bethany. Lazarus is already dead, and it’s so close to Jerusalem that it’s going to be dangerous! We can’t talk you out of it? Oh, all right then. Let’s go guys, so we can die with him. Or the one in John 13 between Jesus and Peter: Lord, what do you mean I can’t follow you? I’m ready to die for you right now!  To which Jesus replies, Really, Peter? You’d face up to the danger and die for me? Let me tell you what’s really going to happen…

And then there’s John 16. Jesus admits that his way of teaching has not always been direct — though as we’ve seen, directness was never a guarantee of their understanding. Finally, he says something they think they can grasp: “I came from the Father and have come into the world; again, I am leaving the world and am going to the Father” (John 16:28, NRSV). I’ve come from point A to point B, and now I’m going from B back to A. Get it?

Got it. The disciples sound almost excited: “Yes, now you are speaking plainly, not in any figure of speech! Now we know that you know all things, and do not need to have anyone question you; by this we believe that you came from God” (vss. 29-30).

It’s debatable, of course, how much anyone could possibly understand of what it means for Jesus to come from and go to the Father. And it’s interesting that the disciples don’t say, “We don’t need to question you,” but “You don’t need us to question you.” What they seem to be saying is, We really get it now. You really are the Big Cheese. We know that you came from God, and believe.

But Jesus’ response here reminds me of the earlier interchange with a desperately overconfident Peter: “Do you now believe? The hour is coming, indeed it has come, when you will be scattered, each one to his home, and you will leave me alone” (vss. 31-32a). Really, guys? You say that you believe, but to what end? The fated hour is nearly upon us, and when it happens you’re going to scatter like sheep and leave me all alone.

Jesus will not, of course, be completely alone, for the Father is always with him (vs. 32b). But his overconfident disciples, ignorant of the trial they would face, will all have run.

We would understand if that were a bitter accusation on Jesus’ part. But it’s not. It’s a word of grace. We’ll see why in the next post.