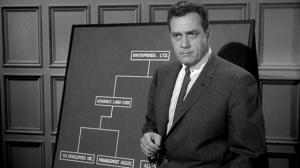 When I was a kid, the most popular fictional lawyer on TV was Perry Mason (I can still hear the blaringly overwrought theme song in my head: da-da-daaaa da-DAH!...). Later, it was Ben Matlock. And audiences are still fascinated with courtroom drama, though today’s storylines are less black and white, and the characters themselves more ambiguous. Mason and Matlock always managed to wring the truth out of witnesses, or confessions out of the bad guys. They made us believe that justice would always win in the end.

Things are a little more complicated in the real world — like when Jesus is executed for speaking the truth and warns his disciples that they will share his fate.

When Jesus tells his disciples of the coming persecution, he describes it as a fulfillment of Scripture: “They hated me without a reason” (John 15:25, CEB). The phrase crops up twice in the Psalms as the psalmist cries out to God to be rescued from his enemies. Part of Psalm 35, for example, reads:

Don’t let those who are my enemies
without cause celebrate over me;
don’t let those who hate me for no reason
wink at my demise.
They don’t speak the truth;
instead, they plot false accusations
against innocent people in the land.
They speak out against me,
saying, “Yes! Oh, yes! We’ve seen it with our own eyes!”
But you’ve seen it too, Lord.
Don’t keep quiet about it.
Please don’t be far from me, my Lord.
Wake up! Get up and do justice for me;
argue my case, my Lord and my God!
Establish justice for me
according to your righteousness, Lord, my God.  (Ps 35:19-24a, CEB)

The background imagery is of a court of law; the psalmist is struggling against those who happily bring false testimony against him. He begs God to “argue his case” for him — or there will be no justice. That same courtroom motif can be found elsewhere in the Psalms and in other Old Testament texts. The righteous — Job, for example — suffer inexplicably and beg to have their day in court and be vindicated.

That imagery is here in John too. Jesus calls the Holy Spirit the “Paraclete” (in Greek, parakletos) which suggests someone who is called alongside to help in some way. The word can be used for a “companion” (CEB), for example, or a legal “advocate” (NRSV, NIV).  The Holy Spirit will “testify” about Jesus (John 15:26), just as the disciples themselves are also called to testify (vs. 27 — the Greek word is the root of the English word “martyr”).

Jesus seems to be painting a word picture in which the Old Testament plea for justice is answered. In the face of blatant injustice, the psalmist cried out to God to represent him in court; in the face of the coming persecution, Jesus is sending the Spirit of God to be the disciples’ Advocate.

And apparently, he’s going to be better than Perry Mason. More on that in the next post.