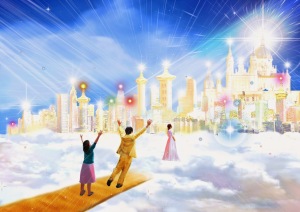 Here’s another oldie for you: “I’ve got a mansion / Just over the hilltop / In that bright land where / We’ll never grow old.” The song paints a glorious vision of heaven in which “the ransomed will shine” — and even though we may be content with just a humble home in this lifetime, we look forward to “a gold one that’s silver lined.” (Frankly, I’m not so sure that most denizens of middle-class America are even “satisfied with just a cottage below,” but that’s a subject for another time.)

The song draws on the King James translation of John 14:2, in which Jesus tells his disciples, “In my Father’s house are many mansions.” That statement is then conflated with some of the imagery from the Book of Revelation, and off we go into grand visions of our heavenly reward.

But the word “mansions,” unfortunately, is misleading. John’s word (in the Greek) means nothing more than a place to stay; there’s no suggestion of opulence in it. The King James renders it that way because it’s working from the Latin translation, which has the word mansiones — but even in the Latin, the word didn’t mean what we associate with the word “mansion” today. Think of it this way. What we often call a “parsonage” — the minister’s place of residence — was once known as a “manse.” Just ask the pastors who’ve lived in one: they weren’t mansions. They were just places to stay.

Jesus’ point, after all, was not to tell his disciples, “Just endure a bit of suffering and deprivation in this lifetime, and you’ll be richly rewarded in eternity.” He was reassuring them, because they were distraught over his announcement that he was leaving and they couldn’t come with him. Here again are his words of encouragement:

Do not let your hearts be troubled. Believe in God, believe also in me. In my Father’s house there are many dwelling places. If it were not so, would I have told you that I go to prepare a place for you? And if I go and prepare a place for you, I will come again and will take you to myself, so that where I am, there you may be also. (John 14:1-3, NRSV)

Their hearts, of course, are troubled, just as Jesus himself had been troubled earlier thinking about the suffering he would soon have to face (John 11:27). He asks for their trust. Apparently, he’s spoken to them before about going back to his Father and preparing a place for them, and as the CEB so nicely puts it, in the Father’s house there is “room to spare.” Would I have told you that if it wasn’t true? he asks. Then trust me. If I am leaving you, it’s because I’m going ahead to prepare a place for you to be with me. And I will come back to take you there.

The disciples aren’t worried about heavenly rewards here. They’re feeling bereft, abandoned. And even if they don’t understand all that Jesus is saying to them right in this moment, they will later, when it matters, when they have to pick up where his ministry left off and put their lives on the line for the gospel.

It’s not about mansions. It’s about the courage that comes from knowing we will have an eternity with Jesus.