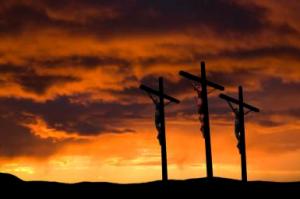 Every year, I have to remind myself of what makes Good Friday good.

The crucifixion of Jesus came as a shock to the disciples, despite the fact that Jesus had repeatedly tried to warn them. They didn’t know what we as readers know: Easter is coming. We endure the tragedy of Friday because we know that Sunday is near.

Still, I think we miss something if we read the story in such a way that Friday is “good” only in a derivative sense, as a necessary precondition for Sunday. In what sense was Good Friday good in itself?

It seems paradoxical — perhaps even out of touch with reality — to think of such a tragic event as good. We’re used to a different way of thinking. We strive to be # 1, to win, to be the best at something. We crave praise, recognition, and glory.

Put negatively: we fear being abandoned by friends. We run from shame and humiliation. None of us would want to be accused of crimes we didn’t commit, arrested and beaten without cause, or executed in public, while passersby look on and mock.

But all of this ends up being part of a strange biblical picture of glory.

In John 3:14, Jesus spoke to Nicodemus about being “lifted up” as Moses lifted up the bronze serpent. He uses the same language in 8:28, and again in 12:32 and 34. It’s an allusion to his crucifixion, in which he will be excruciatingly lifted above the ground while nailed to a wooden cross.

But the same language can be used for lifting something up in exaltation. Paul, for example, uses a related word when he tells how the eternally preexistent Christ humbled himself by taking the form of a human servant, to be killed on a cross. But that, of course, is not the end of the story:

Therefore God also highly exalted him
and gave him the name
that is above every name,
so that at the name of Jesus
every knee should bend,
in heaven and on earth and under the earth,
and every tongue should confess
that Jesus Christ is Lord,
to the glory of God the Father. (Phil 2:9-11, NRSV)

In God’s paradoxical plan, humility is the road to glorification, crucifixion the path to resurrection and exaltation. And it isn’t just that bad leads to good. Jesus isn’t Lord in spite of his self-emptying sacrifice: he demonstrates the nature of his lordship through it.

Can we wrap our minds around the fact that humility isn’t just something that God had to stoop to in order to solve a problem? Can we conceive of a God whose very being is expressed through self-emptying love?

It’s a tough sell for a culture that has a thousand-and-one ways to market the secrets of success. We want ten surefire strategies, and crucifixion doesn’t usually make the list.

Let’s face it: on any given day, we’d rather be lifted up the world’s way than Jesus’ way. And sometimes we may be. There’s nothing intrinsically wrong with receiving a worldly accolade or two. But we may quickly find that such accolades steal our hearts and become our greatest desire — in essence, they become our god.

Those who follow Jesus take the long view. We realize that we may need to sacrifice today’s glory for tomorrow’s, trusting the promise of Jesus’ return and our resurrection. That’s the day of glory and vindication toward which we strive.

But at the same time, let’s not forget that the sacrifice itself can be glorious — the “good” in “Good Friday” — to the extent that it mirrors the very character of a humble God.