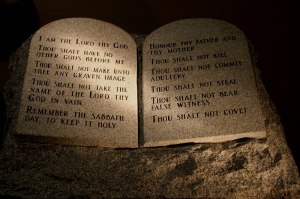 The commandment was as plain as day: “Thou shalt not commit adultery.” The scribes and Pharisees who hauled the adulteress before Jesus and the crowds knew she had no defense. And according to the Law of Moses, she was to be put to death. What would Jesus do?

As we’ve seen, Jesus answered in a way they hadn’t anticipated: “Let anyone among you who is without sin be the first to throw a stone at her” (John 8:7, NRSV). And one by one, the woman’s accusers walked away.

But wait. Why did they give up so easily?

One of them, for example, might have straightened his spine and said, “Oh, no you don’t, Jesus. Don’t try that ad hominem stuff with us (come on, we passed our basic logic class!). This isn’t about us. You know perfectly well that we caught her dead to rights, and the Law is clear. Nobody here is claiming to be sinless. That’s not the point. We’re asking you, in your capacity as someone who claims to know God so well: do we do what the Law says, or not?” Go ahead, answer the question, troublemaker. We’ve got you now…

From where they stood, that would have been a legitimate response. Why didn’t someone say it? Did no one think of it?

Who knows. But I like to imagine that this is what happens — at least on occasion! — when self-serving legalism stands in the presence of true righteousness.

The scribes and Pharisees had sought to trap Jesus in a no-win scenario. Logically, he had to answer one way or the other, and either answer led to controversy.

But Jesus’ calm, unhurried answer didn’t win the day on the strength of its superior logic. He completely sidestepped his opponents’ boundary-making, us-versus-them way of using the Law, in a way that revealed its true purpose: to shine a light into the dark places of the human heart.

Jesus’ opponents fled the scene, as shadows flee the light.

2 thoughts on “Light and shadow”