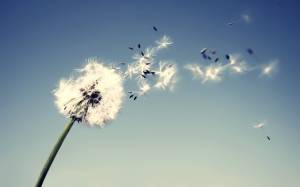 When our kids were small, I would sometimes tell them bedtime stories. I’d spin some tongue-in-cheek adventure tale that would get them laughing and wanting more. That may not have been the best strategy for calming them down to sleep. But hey, we were having fun.

The father of a friend of ours also told her bedtime stories. Sometimes, he would pause and whisper dramatically, “And the wind blew…” She remembers the dark aura of mystery those words created for her.

It wasn’t until much later that she learned he was just buying time to think of what to say next.

Wind is a fact of life (especially if you live in Chicago). And yet it has a sense of mystery about it: we can feel it, but we can’t see it. In books and movies, a sudden gust of wind often represents the intervention of fate. It’s the invisible force that slams doors and carries Mary Poppins to her next assignment.

And it can represent mystery even in the words of Jesus: “The wind blows where it chooses, and you hear the sound of it, but you do not know where it comes from or where it goes. So it is with everyone who is born of the Spirit” (John 3:8, NRSV).

He says this to Nicodemus, the Pharisee who came to him as a seeker, and who is confused and flabbergasted by Jesus’ pronouncement that anyone who wants to see the kingdom must be born “from above” (or “again” or “of the Spirit,” with the emphasis on the latter, John 3:3-7). What does he mean?

Here, the word “wind” can also be translated as “spirit” or “breath.” (It’s the root of the English word “pneumatic,” as in air-powered tools, or even the French word for car tires.) Some, therefore, take Jesus to be saying that the Holy Spirit does whatever it wants, and is not subject to human control or expectation.

But in context, it makes more sense to read Jesus as doing a bit of wordplay, trading on the double-meaning of the word. He’s saying something like, Look, Nick, think about it. There are mysteries to life, like the wind. You hear it; you feel it. But you know neither where it came from, nor where it’s going. You have questions of destiny: how does one get into God’s kingdom? I tell you that it’s not by being born a child of Abraham — it’s by being born of the Spirit. That may be as mysterious to you as the wind. But so it is with one who is born of the Spirit. Where are they from? They’re born from above. And where are they going? Their destiny is the kingdom.

And let’s not forget: throughout the gospel, there will be questions of where Jesus came from, and where he is going.

Nicodemus still doesn’t understand. He blurts out, “How can these things be?” (vs. 9). I imagine Jesus shaking his head as he responds, “Are you a teacher of Israel, and yet you do not understand these things?” (vs. 10).

That’s okay. He’ll get it later.

And the wind blew…