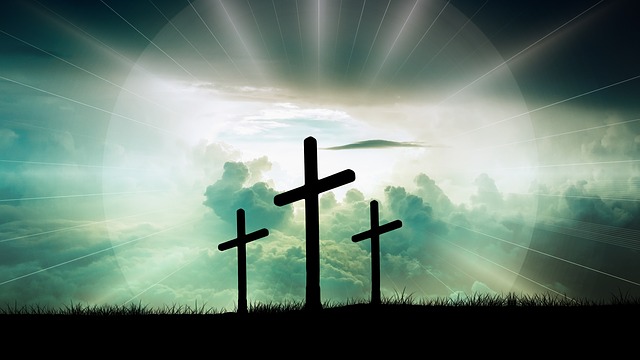 Imagine the scene. Mary Magdalene and her companions go to the tomb of Jesus and find it empty. Two terrifyingly radiant angels appear, asking them why they’re looking for the living among the dead, as if to say, “You’re his disciples. Don’t you remember what he said?” The women hurry back to tell the Eleven what they’ve seen and heard. But the men — being men? — don’t believe what the women are saying. I like the NRSV’s translation: “These words seemed to them an idle tale” (Luke 24:11).

Then Peter plays the fool: he gets up, and runs to the tomb to see for himself. One wonders if some of the others hung back because they didn’t dare believe.

As believers, we know and accept the story of Jesus’ crucifixion and resurrection. But Paul reminds us just how foolish a story it really is (1 Cor 1:20-25). A crucified Messiah? A victorious revolutionary who wins by dying a torturous death? Really? And the resurrection is equally nonsensical; it is not a fact of this world, not something we can explain. We know a lot about the mechanics of death and dying…but not of resurrection.

The question is whether or not, having professed that we believe, we go right back to living within the boundaries of what the world considers reasonable. Resurrection? Oh, yeah, that’s something that happened to Jesus a long time ago. And we’ll be resurrected too, sometime way off in the future. But meanwhile, I have to slog through this life as best I can, just like everyone else.

Yes, the resurrection of Jesus was an event in time and space that happened thousands of years ago. Yes, our own bodily resurrection will be in the future, sometime after we die. But what does it mean to believe during the time in between? We have to add one more bit of foolishness: as both Jesus and Paul would insist, we are in Christ, and the same resurrected Christ is in us.

And what does that mean, exactly? How would, say, a physiologist explain that?

I have no idea.

But however we understand what it means to say that we have the Spirit of Christ within us, or to believe that we are one with Christ in his death and resurrection, it means at least this: new life is a present reality and not merely a future one.

As Paul told the famously troublesome Corinthians: “So if anyone is in Christ, there is a new creation: everything old has passed away; see, everything has become new!” (2 Cor 5:17). “If anyone is in Christ,” Paul says; by this he doesn’t mean, “Let’s see if maybe we can find someone who fits the bill.” He means, “You are in Christ. Yes, you. The day of God’s new creation has already begun, and you’re part of it.”

Today is the day we as the church commemorate the resurrection. Every day, however, is the day in which we should live the truth of being made new in Christ. Sure, it sounds like a foolish idea; after all, isn’t it the same face that still stares back at you through the bathroom mirror? And oh, aren’t you still struggling with that bad habit you’ve been trying so hard to break? Hah! your doubts proclaim loudly. Newness indeed. What a crock.

The fact of newness doesn’t instantaneously transform you into a carbon copy of Jesus; again, think of Paul writing to the Corinthians who had so badly abused him and each other. But he saw something in them that they were still learning to see in themselves: the Spirit of Christ.

So who are you, really?

You are the beloved of God. You are joined to his Son by his Spirit. Who you are is not who you were. That’s not a joke, that’s reality.

May your Easter truly be a celebration of new life.