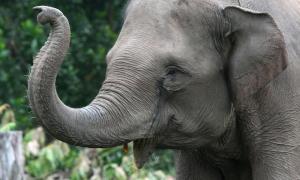 You’ve probably heard the tale of the blind men encountering an elephant for the first time. Each touched a different part of the animal — the trunk, an ear, a leg, a flank, the tail. On the basis of what they could feel, each declared confidently what they had found: It’s a snake! No, it’s a fan! It’s a tree! It’s a wall! No, it’s a rope!  The moral of the story, of course, is that even if several people are confronted with what should be the same experience (at least from an outsider’s perspective), they may give partial accounts that can be different in the extreme.

You can’t really blame the blind men. None of us are capable of taking in everything. We are not God, but human beings who approach each situation with a particular history, a particular bias in terms of what we notice and what we don’t, what gets into the stories we tell and what doesn’t. The reality is always greater than what we are able to describe.

That’s important to remember when we come to John’s tale of the resurrection of Jesus. We’ve noted before that the so-called “Synoptic gospels” — Matthew, Mark, and Luke — share a great deal in common (scholars believe that Matthew and Luke used Mark as a source), while John’s story of Jesus is the most unique. He narrates several episodes that don’t appear in the Synoptics, and leaves out many that do. As John himself says at the very end of his gospel, “But there are also many other things that Jesus did; if every one of them were written down, I suppose that the world itself could not contain the books that would be written” (21:25, NRSV).

The resurrection presents a related but thornier puzzle: all four gospels narrate the same event, but with interesting differences. Read the four accounts side by side; you can’t help but have questions. For example, in John, Jesus seems to appear only to Mary Magdalene, at the tomb. In Matthew, he appears to Mary Magdalene and another Mary, but only on their way back from the tomb. The so-called “shorter ending” of Mark mentions three women but no appearance by Jesus (though the longer ending seems to match John). Luke describes a whole group of women, but like Mark, and unlike John or Matthew, has no appearance by Jesus. Other questions could also be asked: how many angels were there, where were they, and what did they say? And so on.

It’s possible to piece the details together in such a way that all the perspectives can be harmonized. Borrowing from Luke, for example, we might assume that there were many women at the tomb, including Mary Magdalene, and for whatever reason, each of the other authors chose to mention only one, two, or three of them.

None of these rearrangements, of course, pleases everyone. And perhaps it misses the point.

None of the gospel writers were direct eyewitnesses to the events they describe (with the possible exception of John, but only with respect to a small part of the story). They have to rely on the testimony of others. And even if you had four eyewitnesses to the same event, they would tell stories that match in some respects and differ in others. That’s what happens when human beings are involved. It comes with the territory.

Ironically, I actually find that strangely encouraging. The gospels weren’t written by a committee. They weren’t composed by four men sitting in a room saying, “Come on, guys, we’d better get our story straight or no one’s going to believe a word of it.” Their stories are filled with the kind of vivid details that come with personal accounts of life-changing experiences.

But even if the details differ from one story to the next, all four accounts agree on one thing.

On Sunday morning, the crucified Jesus rose from the dead.

And that’s the one reality that matters most.