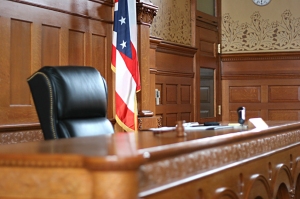 Since moving to our present home over 25 years ago, I’ve been summoned for jury service probably more than a dozen times, and have actually served as a juror three times (once as the foreman on a criminal case).

In all the various courtrooms I’ve visited, the judge’s bench is elevated above all else, a seat of power from which life or death pronouncements are made. That’s the image that comes to mind when I read this from Paul:

So whether we are at home or away, we make it our aim to please him. For all of us must appear before the judgment seat of Christ, so that each may receive recompense for what has been done in the body, whether good or evil. (2 Cor 5:9-10, NRSV)

Perhaps you’ve seen movies depicting Jesus on trial before Pontius Pilate. A crowd has gathered; the governor sits on the lofty bench from which he will render his verdict, leaning toward the bruised and battered King of the Jews. Later, Paul himself would appear before such a judgment seat in Corinth (cf. Acts 18:12-16). Here, he writes that one day Jesus will be the one on the seat, and believers will be the ones to be judged.

“Judgment”: it’s a fearsome word. Most of us have some sense of our guiltiness, whether before God or someone else. And though we’d like to believe that praying the Jesus prayer will exempt us from judgment and shoo us straight into heaven, Paul says no. “All of us,” he says, must appear, no exceptions.

And then, as the saying goes, we’ll get what’s coming to us.

But wait…aren’t we redeemed, justified by the blood of Jesus? Aren’t we saved by grace? Haven’t we renounced any religion by which we try to earn salvation by doing good deeds?

Yes, yes, and yes. And we will still be judged.

The Corinthians may remember what Paul wrote in his earlier letter, and so should we. In 1 Corinthians 3:11-15, Paul uses vivid imagery to describe the Day of Judgment. All believers will be held to account for what they’ve done in this lifetime to build on the foundation of the gospel. Our work will be tested by fire; if we’ve done good work and used good materials, the work will survive the test.  If we haven’t, it won’t.

But Paul is careful to add that even when the work goes up in smoke, “the builder will suffer loss; the builder will be saved, but only as through fire” (vs. 15, NRSV). In other words, for those who are in Christ, salvation itself is not at stake, but rather any reward graciously offered for faithful service.

That’s not to say that Paul’s words here are all sweetness and light. Neither death nor judgment are cheery topics, and the Corinthians will not have forgotten the sting of Paul’s rebukes for their behavior.

Paul, however, writes as one filled with confidence, a person who in all circumstances makes it his aim to please the Lord and so counsels others. Though the thought of approaching the judge’s bench may be daunting, and rightly so, Paul’s demeanor is not one of servile fear, but of reverent love.

Thus, though there is a hint of threat, Paul’s words seem to reflect more a positive motivation for a life of righteousness than a negative one. Perhaps a better image would be that of a child, offering a gift to a trusted and beloved parent: “Here, Mommy and Daddy, look what I’ve done.”

And as we’ll seen in future posts, it’s because we truly understand what God has done, in love, that we want to return the favor.