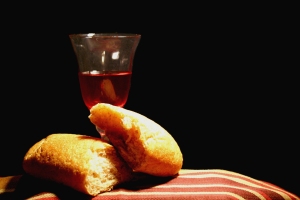 And he took bread, gave thanks and broke it, and gave it to them, saying, “This is my body given for you; do this in remembrance of me.”  In the same way, after the supper he took the cup, saying, “This cup is the new covenant in my blood, which is poured out for you.”  (Luke 22:19-20, NIV)

The Lord’s Supper.  Communion.  The Eucharist.  The name varies across traditions, as do the other specifics.  Wine or grape juice?  A common cup or no?  Leavened or unleavened bread?  What kind?  Matzos?  King’s Hawaiian bread?  You can even get little mass-produced single-serving plastic containers: peel off the top seal, and you’ll find a tiny communion wafer (that looks and tastes a bit like paper); peel off the next seal, and there’s a sip of grape juice.  Not terribly elegant perhaps, but if your goal is efficiency, well, there you go.

Despite the diversity, the traditions all present believers with the opportunity to engage in an act of remembrance, centered on the bread and cup.  Teaching my way through Matthew on Sunday mornings, I’ve come to chapter 26 and the scene in the Upper Room.  A previous post focused on Judas’ betrayal of Jesus; this one has given me the opportunity to meditate on something that I too easily take for granted.

We’re used to our various ways of honoring the Lord’s Supper.  But I’ve had conversations with Christians who have told me that they obediently go through the motions without knowing why–other than the fact that Jesus commanded it.  So why partake in the ritual at all?  What does it mean?

Second, Jesus is no passive victim.  He knows what’s going to happen, and gives his life willingly.  Jesus is fully aware of Judas’ treachery, and sets the wheels of his Passion in motion by letting Judas know that he knows.  Jesus is the one who secretly orchestrated a meeting place where they could eat the Passover meal together in peace.  And as they sit down to the ritual meal, Jesus says to them, “I have eagerly desired to eat this Passover with you before I suffer” (Luke 22:15, NIV).

No, this is no accident.  Jesus has chosen this time and this place, not only to die, but to teach his disciples one last lesson about the meaning of his death.  As they eat foods that are rich in ceremonial meaning, they remember the central story of the Jewish faith: the night of the first Passover and the subsequent exodus from Egypt (Exod 12-14), when God in his might and mercy delivered his people out of slavery.

Jesus is about to deepen the story and give them something else to remember.

“This cup is the new covenant in my blood.”  New covenant.  The language comes from the prophet Jeremiah, who had the heart-wrenching responsibility to preach condemnation as he watched Jerusalem fall and God’s people were carted off to Babylon.  But scattered amidst those scathing words of judgment were rays of hope:

The days are coming…when I will make a new covenant with the people of Israel and with the people of Judah.  It will not be like the covenant I made with their ancestors when I took them by the hand to lead them out of Egypt, because they broke my covenant, though I was a husband to them… This is the covenant I will make with the people of Israel after that time… I will put my law in their minds and write it on their hearts.  I will be their God, and they will be my people.  No longer will they teach their neighbor, or say to one another, ‘Know the Lord,’ because they will all know me, from the least of them to the greatest… For I will forgive their wickedness and will remember their sins no more. (Jer 31:31-34, NIV)

God had lovingly brought his people out of slavery in Egypt.  At Sinai, he gave them the Ten Commandments and other instructions (Exod 20-23) which the people solemnly promised to obey.  To seal the covenant, Moses sprinkled the blood of bulls on the people (Exod 24:8).  But we know the story: the people disobeyed, over and over, generation after generation.  Destruction and exile were the eventual result.

But in the midst of judgment and exile, hope.  From the shattered remains of the old covenant, the gracious promise of the new.

Jesus is proclaiming: the time has come.  God is offering a new covenant for a new Israel.  Jesus is our spotless Passover Lamb through whose blood God will forgive our wickedness and remember our sins no more.

If God forgets our sins, shall we remember them when we take the bread and cup?  Well, surely that’s unavoidable.  But we’re told to remember what God has done, not what we have done.  Repentance is appropriate, but always in the context of grace.

And more than this, we must remember that God’s purpose isn’t simply to rescue individuals but to redeem a people.  We are part of a story that begins in the Old Testament and runs through the New and into the present day: God wants a covenant people, a holy nation, those who are called to bless the world on God’s behalf.

Our exodus, therefore, is not merely from the penalty of sin but from slavery to it, so that as a people we may serve the living God, submitting ourselves to a life of righteousness.  This isn’t an external righteousness of mere obedience to rules, but one in which the law is more and more inscribed on our hearts.  Thus we remember, through the bread and cup, that by the body and blood of Christ we are ushered into an intimate covenant relationship with God and a life empowered by his very own Spirit.

What kind of covenant people will we be?  At the very least, let’s be those who have long and active memories of the story of which we are a part.