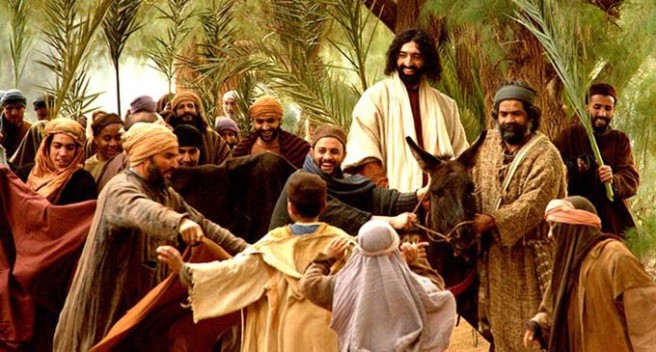 Today is Palm Sunday, the day on which we commemorate Jesus’ triumphant entry as king into the city of Jerusalem, just days before his arrest and crucifixion. The road is already thronged with pilgrims coming to the city for Passover. But Jesus is also accompanied by an entourage from Bethany, where he had recently raised Lazarus from the dead. Some people also come out from Jerusalem when they hear that Jesus is coming. The scene would probably have been chaotic, the mood jubilant. This is the one. The King, the Son of David has come. All of our hopes are about to be realized.

It’s a good illustration of how people can get it both right and wrong at the same time. Yes, he is the one, the Messiah who was to come. But no, what’s about to happen is not what they expect.

In the previous post, we explored the idea of being in the world but not of it. Jesus’ prayer to the Father for his disciples was not that they would be taken out of the world; quite the contrary, they had a mission to fulfill. Jesus came to give light and life in a world of darkness and death-dealing, and they were being commissioned to carry on in his stead.

But they were not “of” the world: having been born “from above” (John 3:3, NRSV), they were not to share the world’s values or ideals. Consequently, Jesus prayed for their sanctification (John 17:17) — a word that suggests something made holy, consecrated or set apart for God’s purposes.

Specifically, he prays that they would be sanctified “in the truth”:

Sanctify them in the truth; your word is truth. As you have sent me into the world, so I have sent them into the world. And for their sakes I sanctify myself, so that they also may be sanctified in truth. (John 17:17-19, NRSV)

The disciples have not yet realized how their world is about to be turned upside-down. In all likelihood, they are reluctant to let go of the personal significance of Palm Sunday as they’ve understood it. They have walked with Jesus; they have received the word he gave them from the Father. But they have not fully understood that word. That will soon change. Jesus will sanctify himself through the cross and the Father will raise him. After Easter, the disciples will know the truth about Palm Sunday and everything else that matters.

But note that this does not mean separating from the world. Jesus warns the disciples that the world will hate them, but does not give them permission to withdraw into protected spaces or isolated communities. Jesus was the light of the world (John 9:5), and they too must shed light in a darkened world — which doesn’t happen by hiding (Matt 5:14-15).

Believers, in other words, must live in the presence and view of others, holding to the truth that sets them apart. As we begin Holy Week, let us remain attentive to what the Spirit may want to teach us about that truth.