I’ll admit it. I have a problem with procrastination. Maybe I should do something about it?

So what do you do? 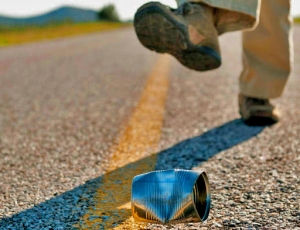 Essentially, nothing. You put off the decision. You table the motion. You move to the next item on the agenda. As the saying goes, you kick the can down the road, hoping that the problem will go away on its own or someone else will make the call and make it their problem instead of yours.

If so, then you might have a little sympathy for Governor Felix and his predicament with the apostle Paul. That’s not to say that there was ever anything admirable in Felix’s behavior. In essence, he acted as a self-centered and crooked politician. But his political situation was indeed a precarious one, and we can understand why he would want to put off making a decision.

As we’ve seen, Paul made hash of the accusations brought against him, leaving Felix in a difficult position. On the one hand, Felix had an obligation to do right by Paul, a Roman citizen, and the governor had already demonstrated that he had no great love for the Jews. How could he decide against Paul, when Paul himself had demolished the case against him?

On the other hand, Felix’s habit of brutally suppressing anything that he perceived as a Jewish uprising made him quite unpopular with the population he was supposed to keep in line, and the Jews were not shy of sending delegations to Rome to complain. Though Felix had connections in Rome, his position with the emperor was precarious, and he knew it. Deciding in Paul’s favor would offend the high priest, and that could end up costing him his job (and the high priest knew that).

It was a no-win scenario.

So, what to do? Kick the can down the road, of course. He declared the hearing over and said to Paul, “When Lysias the tribune comes down, I will decide your case” (Acts 24:22, NRSV). What other information did he need? Did Lysias ever actually come to Caesarea? Luke doesn’t say. What matters is that Felix found a way to adjourn the meeting without losing face.

Paul was remanded to military custody. Rome didn’t do anything for the care and comfort of its prisoners — not even for Roman citizens — so Paul wasn’t sunning himself by the pool. But they did allow him some freedom, and his friends were allowed to minister to him. (Luke himself, for example, may have made the earlier trip with Paul from Jerusalem to Caesarea.)

Felix, meanwhile, wasn’t done with Paul. Some time after the hearing, when the governor was with his wife Drusilla, he brought Paul in for a chat. Drusilla, who was probably about 20 years old at the time, was Jewish, the great-granddaughter of Herod the Great (the “Herod” of the the Christmas story). She was reputed to have been quite beautiful, and had been promised in marriage to someone else. But Felix, being Felix, had lusted after her and stolen her away.

Now, as husband and wife sat and listened to Paul, the apostle spoke about “faith in Christ Jesus [and about] justice, self-control, and the coming judgment” (Acts 24:24, 25, NRSV). These were bold words to say to a governor of Felix’s unsavory reputation. One thinks of John the Baptist, who had condemned Herod Antipas (one of the sons of Herod the Great) for marrying the former wife of his half-brother, and ended up losing his head over it (literally).

But Felix didn’t order Paul executed. The governor had heard the message of judgment, and was afraid (Acts 24:25a). He had an opportunity, right then and there, to repent and be saved. What did he do?

He kicked the can down the road: “Go away for the present; when I have an opportunity, I will send for you” (Acts 24:25b). And Felix did send for Paul, often. But apparently, he never got any closer to accepting the gospel. Luke tells us bluntly that Felix was simply hoping that if he kept the game up long enough, Paul would eventually offer him a bribe under the table (vs. 26). After all, hadn’t Paul said that he had come to Jerusalem with money for the poor? Well, maybe there was more where that came from.

Felix, of course, never got his bribe. Eventually, he was recalled by Rome because of complaints against him. Did he do the right thing even then? No: in order to curry favor with the Jews, he left Paul in custody, even though it had already been two years (Acts 24:27). Always the politician, always trying to manipulate the situation to his favor, always putting off the big decisions for fear of the consequences.

Felix then disappears from Luke’s story. Indeed, after his recall to Rome, he mostly disappears from all of recorded history. Too bad. It would have been great to hear what might have happened, had he made the right decision when he had the chance.

This site uses Akismet to reduce spam. Learn how your comment data is processed.