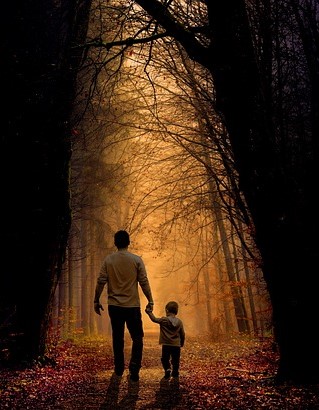 We’ve always known about the importance of moms, and rightly so. Moms begin bonding with their babies while the little ones are still growing and kicking in the womb. If all goes well — and it usually does — that bonding only deepens after the birth. Children are indelibly shaped by the quality of their relationship to their mother.

But what about dad? For a long time, researchers studying the effects of parenting on kids focused on mom, almost as if dad didn’t exist or didn’t matter. It wasn’t until about the 1980s that researchers “discovered” Dad. Oops.

The verdict is in: dads matter — a lot! — whether through the lingering impact of their absence or the ongoing influence of their presence.

Surely, by now, few should be surprised by that statement.

But then you have to wonder: why do we hear so much about Mary at Christmastime, and so little of Joseph?

Of course, it doesn’t help that there is so little given to us in Scripture about Joseph in the first place. But some Bible scholars have begun to wonder whether writers like Matthew have intentionally left gaps in the story to encourage readers to imaginatively fill in the blanks as they read. After all, what little information we have is still richly suggestive of Joseph’s character, and one can make educated guesses on the basis of what we know of that time and culture.

In last Sunday’s Advent reflection, for example, we saw how Matthew points to the scandalous elements of the Messiah’s family background. That deftly sets up the scandal du jour:

When Mary his mother was engaged to Joseph, before they were married, she became pregnant by the Holy Spirit. Joseph her husband was a righteous man. Because he didn’t want to humiliate her, he decided to call off their engagement quietly. (Matt 1:18-19, CEB)

Matthew won’t let us romanticize the pregnancy. Here’s how it begins, he says. Mary was already pregnant before she got married. The people around Joseph and Mary weren’t stupid; they knew how many months it took to have a baby, and they could count. They were also inordinately fond of gossip. Engagement, marriage, the birth of your first child: these were all important social events. People were watching. And whispering.

It’s against that background that Matthew calls Joseph “a righteous man,” who demonstrated the fact by the way he handled the situation. When he found out that his sweet young fiancée was already pregnant, he would have been as shocked as anyone else.

And he knew what people would say. Either (a) Mary was fooling around and was therefore no better than a harlot, or (b) Joseph was the one who got her pregnant and was therefore a cad himself. By the legal and cultural standards he knew, Joseph would have been completely within his rights to make a spectacle out of Mary to save his own reputation.

It would have helped him save face. But that’s not the man he was. He decided to treat Mary with mercy, even before an angel was sent to let him in on the secret.

Was it love? Perhaps.

What’s important to realize, though, is that respectfully and quietly sending Mary away would have made Joseph the butt of the rumors and gossip for years to come. He was willing to pay the price to do the right thing.

For those of us who are still raising kids, it might be good to ponder on that this Christmas. Our children are given into our care by God, and we cannot take that stewardship lightly. They are learning from us, watching what we make of Christmas and all of life.